Memphis led by 16 at the half and extended the advantage in the third quarter as the Pistons continued to struggle shooting. Detroit made only one of its first 10 shots in the third. Eventually, Memphis would build its lead to 82-52 and the Pistons were headed to their second blowout loss on consecutive nights. 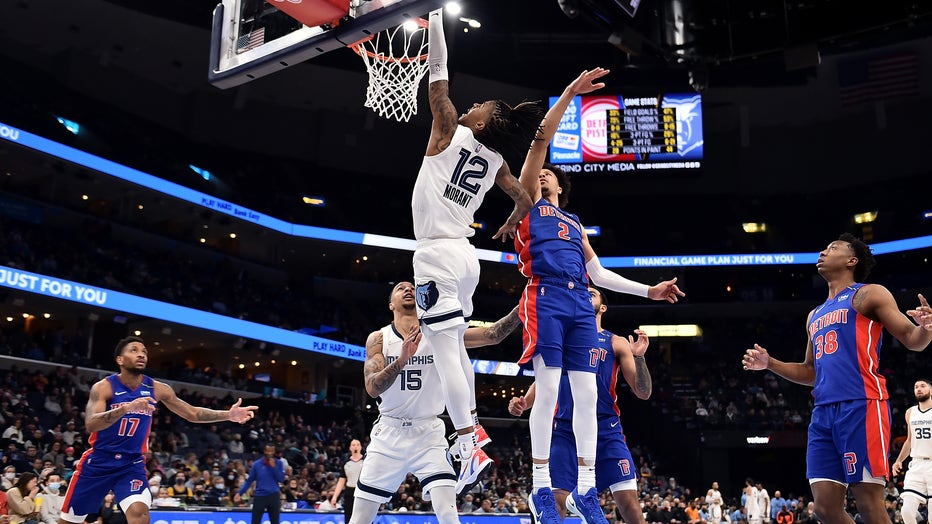 MEMPHIS, TENNESSEE - JANUARY 06: Ja Morant #12 of the Memphis Grizzlies goes to the basket against Cade Cunningham #2 of the Detroit Pistons during the second half at FedExForum on January 06, 2022 in Memphis, Tennessee. NOTE TO USER: User expressly

The Pistons, who lost Wednesday night in Charlotte 140-111, quickly found themselves down by double digits against Memphis. The lead would reach 18 early as the Grizzlies shot better than 50%, while the Pistons misfired on all six of their 3-point attempts.

The Memphis shooting remained near 50%, the lead maintained at double digits and the Grizzlies led 62-46 at the half, Morant and Williams leading the way with 14 points each.

Pistons: Saddiq Bey, who averages 15.1 points a game, was held scoreless until a 3-pointer with 3:28 left. He missed his previous five shots in the game. … C Isaiah Stewart was back in the starting lineup after missing the previous six games under the health and safety protocol. … Lee had 10 points at the half, hitting all three of his shots, including a pair of 3-pointers.

Grizzlies: Of the eight players on the injury report, four were listed under the health and safety protocol. Before the game, coach Taylor Jenkins said all of the players have been cleared from the protocols and would return when ready. Dillon Brooks and De’Anthony Melton were available. … The seven-game winning streak matched a winning span between Jan. 8 and Feb. 1, 2021. … Williams started his first NBA game. His previous scoring high was 11 points on Nov. 3 against Denver.