RALEIGH, N.C. - Alex Nedeljkovic knew that the Carolina Hurricanes would keep the pressure on him in net. He had seen it up close last season in so many practices with the team.

He held up against that swarming attack Thursday night, this time for the Detroit Red Wings while slowing his former team's push for the Metropolitan Division title.

Nedeljkovic had 46 saves in a sharp performance, helping the Red Wings beat the Hurricanes 3-0 for his third shutout this season.

"Anytime you can get a shutout in this league, it's always special," Nedeljkovic said. "Maybe tonight was a little bit more." 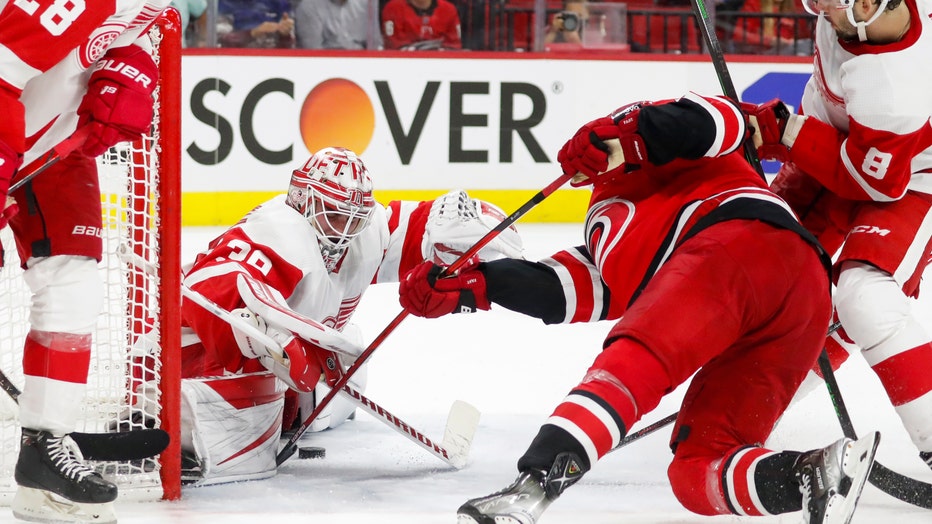 RALEIGH, NC - APRIL 14: Goaltender Alex Nedeljkovic #39 of the Detroit Red Wings goes down in the crease to make a save on a shot from Jesper Fast #71 of the Carolina Hurricanes during an NHL game on April 14, 2022 at PNC Arena in Raleigh, North Caro

Moritz Seider, Adam Erne and Filip Zadina scored for Detroit. The Red Wings were recently eliminated from the postseason chase for the sixth straight year, but managed to push past the Hurricanes despite being outplayed much of the way.

"Obviously, they're one of the best teams in the league," Detroit coach Jeff Blashill said. "I thought our guys battled. We didn't do everything perfect. Obviously Ned was outstanding, was absolutely great.

"And good for him by the way, I know this one meant a lot to him."

Nedeljkovic had a strong run for the Hurricanes last season but the team traded him to Detroit in July and opted to reshape their goaltender position by bringing in Antti Raanta and Frederik Andersen.

"There was never any hard feelings," Nedeljkovic said. "At the end of the day, it’s a game, but there’s a business side to it, and i understand that. They had to make what they thought was best for them. and honestly it’s a really good move for me as well."

Carolina finished with a 46-22 edge in shots on goal, including a long stretch of the second period played in the Detroit end of the ice. But Nedeljkovic tood up against every swarming push or breakaway by Carolina.

"Tip of the cap, Ned was good," Carolina forward Jordan Martinook said. "Obviously, we’ve seen he can steal games. Felt like we had enough chances definitely to score a couple. ... Thought we created a lot and just couldn’t get one by him."

Nedeljkovic stopped Andrei Svechnikov on a charge down the left side then Sebastian Aho on a rebound about 6 1/2 minutes into the game.

He also denied another quality chance for Aho early in the second when he stopped Carolina's star from between the circles on a feed from Seth Jarvis from behind the net. He got a glove on Ethan Bear's center blast enough to cause the puck to bounce back behind him over the goal, then caught a bit of a break when Aho appeared to catch the crossbar on a breakaway.

All those efforts kept the game scoreless until a trailing Seider took a feed from Dylan Larkin and beat Raanta at 19:47 of the second period.

Raanta finished with 19 saves in a missed opportunity for a Carolina team that entered leading the idle New York Rangers by two points for the division lead.

This marked the third time Nedeljkovic had faced the Hurricanes for the Red Wings. He lost the first in December but earned an overtime win in March.

The 26-year-old netminder — who won 15 games with a 1.90 goals-against average and .932 save percentage for Carolina last year — had surrendered seven goals on 62 shots in the two meetings this year.

Erne pushed the lead to 2-0 when he got a step inside of Tony DeAngelo to a loose rebound and extended his stick to push the puck around Raanta at 3:01 of the third. Zadina’s goal all but sealed the game at 13:33.

"He got better I thought as the game went on," Carolina coach Rod Brind'Amour said. "I thought the first period, you could tell, his lungs — he was a little bit red-faced."

The game paused for several minutes during one second-period stoppage early in the period for arena staff to work on improving the ice surface along the boards near the right faceoff circle.

Red Wings: At the New York Rangers on Saturday.

Hurricanes: At Colorado on Saturday night.