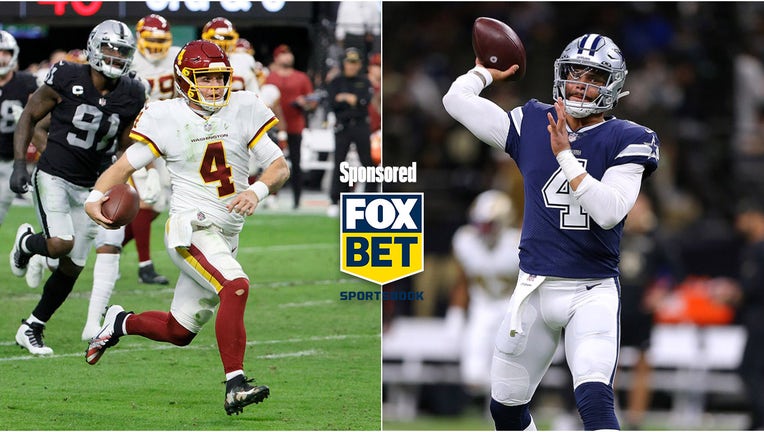 The Washington Football Team looks to continue its recent success at home against the Dallas Cowboys on Sunday in a game that could help decide the NFC East Division winner.

Here's everything you need to know about the NFL odds on Sunday's matchup between the 8-4 Cowboys and 6-6 Washington Football Team — the point spread, moneyline, total over/under and pick from our betting expert (with all NFL odds via FOX Bet).

WFT swept the two games against the Cowboys last season, which was the first time Washington has swept Dallas since the 2012 season. Now the WFT is aiming for three wins in a row over Dallas, something the WFT has not done since beating the Cowboys four times in a row from 1986-88.

The rested Cowboys last played against the New Orleans Saints last Thursday, so they will have 10 days off between games. That should benefit running back Ezekiel Elliott, who had an MRI on his right knee after the win over the Saints.

The knee is "healing up and going in the right direction," Elliott said.

Elliott and Tony Pollard have formed a formidable one-two punch for the Cowboys.

The strong running game benefits Cowboys quarterback Dak Prescott, who is 7-1 in eight career starts against WFT. In those games, the signal-caller is 157-for-227 passing (69.2 percent) for 1,866 yards, 13 touchdowns and one interception.

"The formula is simple: Dallas running the ball and throwing on play-action," FOX Sports' Colin Cowherd said. "Amari Cooper had just come off of COVID-19 last week; now, he's had more time to get better. Dak with a healthy Amari is a different quarterback, so Dallas is the play here."

Rookie linebacker Micah Parsons is getting it done for Dallas' defense with a team-high 10 sacks (twice as many as his nearest teammate) and 72 tackles, second on the team. Parsons is the first Dallas rookie to record a sack in five consecutive games.

When it comes to Washington, Taylor Heinicke took over as the starting quarterback after Ryan Fitzpatrick suffered a partial hip dislocation in the season opener.

Heinicke is the first QB in WFT history to post a completion percentage of at least 70 percent in four consecutive games, with a minimum of 10 pass attempts per contest.

WFT defensive end Montez Sweat, who missed the previous four games with a fractured jaw and was expected to return to practice Wednesday, reportedly tested positive for COVID-19. Sweat is second on the team with four sacks.

The Cowboys are 9-3 against the spread (ATS) this season.

The Cowboys have hit the over in the over/under six times in 13 games this season.

The Cowboys have been favored by 4 points or more seven times this season and are 4-3 ATS in those contests.

WFT has five wins ATS in 12 games this season.

WFT has covered a spread of 4 points or more once in five games this season.

WFT has hit the over in the over/under five times in 12 games this season.

FOX Sports' Colin Cowherd: "Dallas is 7-0 when they rush for over 100 yards, so that's the secret sauce. Zeke Elliott will have extra rest, along with Tony Pollard. That tells you Dallas will probably have some success running the ball, which is why I would take Dallas here in this game."

FOX Sports betting analyst Jason McIntyre: "I'm with you. Tyron Smith should be healthy. They're expecting Randy Gregory and maybe Demarcus Lawrence back to go along with Micah Parsons. This Dallas team will probably be the healthiest they have been all season."

Download the FOX Super 6 app for your chance to win thousands of dollars on the biggest sporting events each and every week! Just make your picks, and you could win the grand prize. Download and play today!