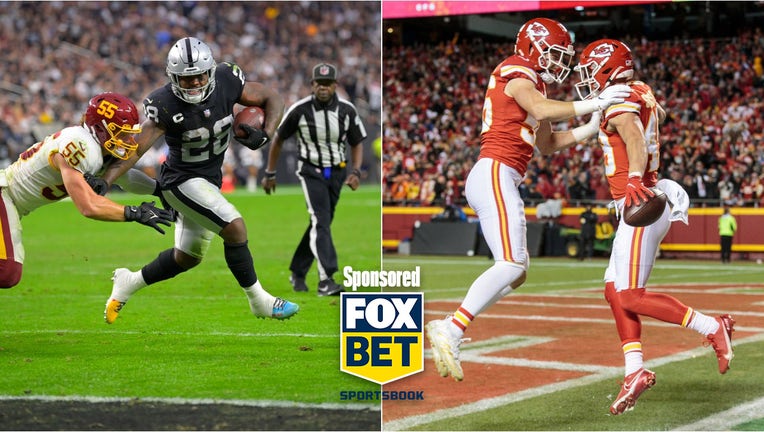 One of the AFC's most intense rivalries resumes when the Las Vegas Raiders play at the Kansas City Chiefs on Sunday.

Here's everything you need to know about the NFL odds on Sunday's matchup between the 6-6 Raiders and 8-4 Chiefs — the point spread, moneyline, total over/under and pick from our betting expert (with all NFL odds via FOX Bet).

The Chiefs lead the all-time series 69-54-2 after beating the Raiders 41-14 in Las Vegas on Nov. 14. Kansas City has dominated the series lately, winning 12 of the last 14 meetings.

The Raiders are 0-6 this season when quarterback Derek Carr is held below 300 yards passing, 6-0 when he throws for more than 300 yards.

"The Raiders are uneven," FOX Sports' Colin Cowherd said. "They have an interim coach (Rich Bisaccia) and had tragedy, so of course they are uneven. But they've got firepower."

On the other hand, the Chiefs are hot. Kansas City is on a five-game winning streak after starting the season 3-4. This is the team's ninth consecutive season (an NFL record) with a winning streak of at least five games.

The Chiefs have allowed only 11.2 points per game during their current streak, holding all five opponents to 17 points or fewer.

Mahomes, the NFL MVP for the 2018 season, has failed to throw a touchdown pass in back-to-back games for the first time in his NFL or college career (Texas Tech). Mahomes has thrown 12 interceptions this season, matching the highest single-season total of his career (2018).

With his next victory, Chiefs coach Andy Reid will become the first head coach in NFL history to win at least 100 regular-season games with two franchises. Reid is 99-41 in the regular season with Kansas City after going 130-93-1 with the Philadelphia Eagles from 1999 to 2012.

The Raiders have six wins against the spread (ATS) in 12 games this season.

The Raiders have hit the over in the over/under six times this season.

The Chiefs have five wins ATS in 12 games this season.

The Chiefs are 1-1 ATS when favored by 8.5 points or more this season.

The Chiefs have hit the over in the over/under five times in 12 games this season.

FOX Sports' Colin Cowherd: "I would take the Raiders here. They went to Dallas and won two weeks ago. This is a potent offense. … This is also a divisional game, and those are always closer. It's very difficult to trounce a division rival two times in a year. You are going to get a super-charged Raiders team with a little chip on their shoulder.

"This is one of my stronger plays. I love the Raiders."

Download the FOX Super 6 app for your chance to win thousands of dollars on the biggest sporting events each and every week! Just make your picks, and you could win the grand prize. Download and play today!