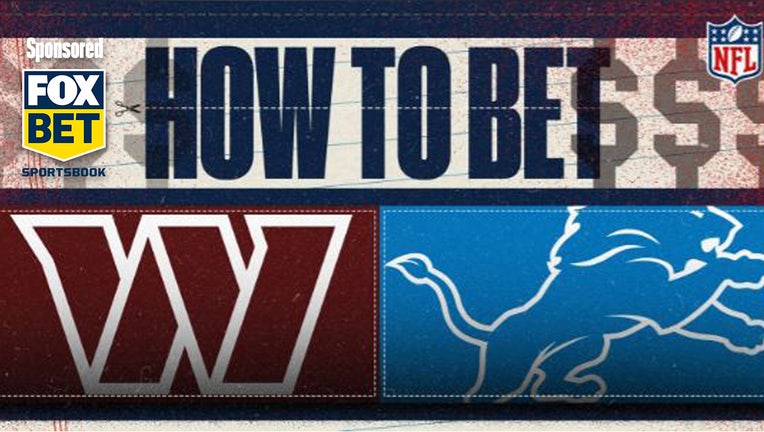 Here's everything you need for the Commanders-Lions game, from the point spread, moneyline, total over/under and pick from expert Geoff Schwartz. (FOX Sports)

The Washington Commanders play at the Detroit Lions on Sunday in one of the NFL's longest running rivalries.

Washington leads the all-time series 31-15, winning five of the past six games since 2009. The teams first met — as the Boston Braves (now Commanders) and Portsmouth Spartans (now Lions) — in 1932.

Here's everything you need from a betting perspective on the Commanders-Lions game, from the point spread, moneyline and total over/under (odds via FOX Bet):

Washington quarterback Carson Wentz is 12-13 against the spread (ATS) and 10-15 straight up (SU) as a starter when a road underdog. Detroit QB Jared Goff is 15-11-2 ATS and 20-8 SU as a starter when the home favorite.

The Commanders are 8-5 ATS and 6-7 SU against NFC North Division opponents since 2015, with the over in the over/under (O/U) hitting in eight of the 13 games.

The Lions are a favorite for the first time since 2020 as they host the Commanders in Week 2. Detroit is quickly becoming one of my favorite teams to wager on. They fight until the very end. Down 31-14 early in the third quarter to the Eagles last Sunday, it appeared the Lions would not cover the 4-point spread. But alas! They battled all the way back to lose 38-35 and cover the spread.

The Commanders, on the other hand, won and covered against the Jaguars in Week 1. They scored two touchdowns in the fourth quarter to pull away from the feisty Jags. Carson Wentz was his usual self. He had some big-time throws with terrible interceptions sprinkled into his play.

With the unpredictable nature of Carson Wentz and then the fact that the Lions seemingly always claw their way back into games to cover, I think a 1.5-point spread does not give an edge either way. However, I do have a wager I like for this game.

The Lions do everything possible to avoid Jared Goff being the offense. Even in a game where they are down 17 points, the Lions had only 37 pass attempts and 28 rushing attempts. Jared Goff threw for 215 yards in a scramble to come back. That’s umm, not impressive. They desperately want to control the line of scrimmage and avoid Goff having to be the focal point. So, it’s always a good wager to take Jared Goff under passing yards.

So that is what I will do here. Jared Goff under.