WASHINGTON - For years, universities have made millions of dollars off athletes' performances while the players received no compensation.

But the economic inequities many athletes endured for decades in college sports have significantly changed with NIL deals. And one college athlete is showing everyone else how it’s done.

What are NIL deals?

NIL stands for name, image, and likeness. On July 1, 2021, the NCAA implemented a policy allowing all incoming and current student-athletes the opportunities to earn money from NIL deals.

According to the NCAA, individuals can engage in NIL activities consistent with the law of the state where the university is located.

One college athlete reaping the benefits of NIL deals is someone you may not have heard of because he is not at one of the top Division I schools, but he’s building a substantial brand playing for an HBCU.

The ‘King of NIL’

Rayquan Smith is a two-sport athlete at Norfolk State University in Virginia. He’s a running back on the football team and a decathlete on the school’s track team.

It’s not just what Smith is doing on the field, but what he’s accomplishing off it. The 21-year-old is known around college sports as the "King of NIL" based on the 70 endorsement deals he’s signed during the past year.

Smith said he reached out to 100 companies to gauge their interest in signing him to an endorsement deal. Only three returned his calls, and two of them were rejections, he explained. But a hydration company called Smartcups gave Smith his first endorsement deal. 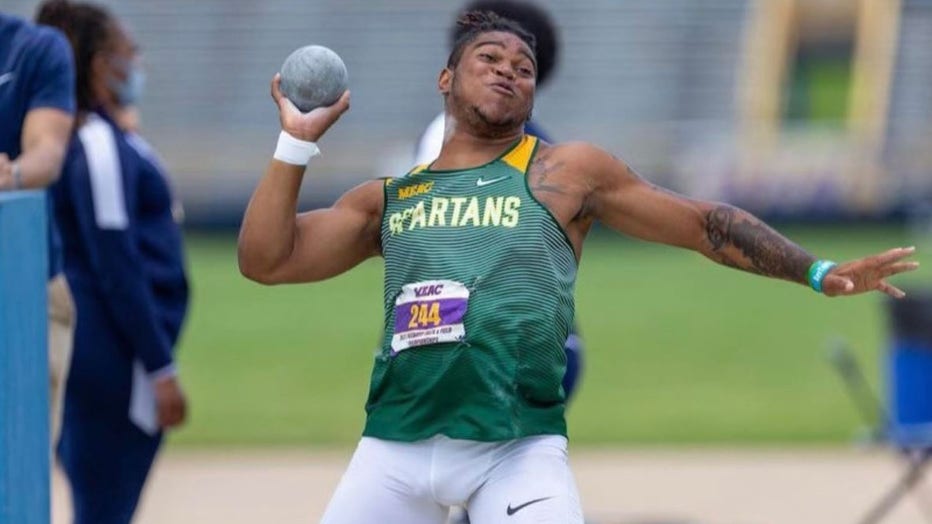 Rayquan Smith is a running back and a decathlete for Norfolk State University. (Photo courtesy of Rayquan Smith/Twitter)

"When it (NIL deals) first started July 1, 2021, I didn’t know too much about it, I was probably the last person to it. I got on social media, I went on Instagram and Google to search it up to figure out why is it so big, what’s going on?" Smith told FOX Television Stations. "When I researched NIL deals, I learned that you can get paid to market yourself with different companies and it’s embracing and marketing yourself, and I felt like I was already marketing myself and now I can get paid for it, and I took advantage of the opportunity that was given to me."

Paying it forward by helping other athletes

Smith’s NIL success has led him to be a mentor for other athletes seeking to profit in the NIL space.

"When it comes to other student-athletes around the country like Power 5, Division II, or Division III, they asked the same questions, how do I get started? What do they have to do, and how can I get a NIL deal? At the end of the day, I want to help everybody. I try to reach out to everyone and help them get NIL deals. One student-athlete at a Division III school has built his brand and is succeeding now with his NIL deals, and another athlete at Temple University I helped him start. I just help different people through my one-on-one sessions and Zoom classes. I try to reach out to them because some people don’t know where to start and that’s my job to help guide them in the right direction."

The Norfolk State standout shared his advice for college athletes on strategies to land endorsement deals. He thinks athletes shouldn’t shy away from taking the initiative to secure an opportunity.

"When it comes to approaching a company, go to a company that will benefit you on and off the field. Most of my deals are useful for the sports that I play; I play football and run track. So, I try to get deals around that, which will benefit me on and off the field. I like Tik Tok and bowling, and I try to get deals around my interest to help benefit me as a person and my income at the same time."

He added: "What I would tell an athlete is to be yourself and don’t let others tell you what you can and can’t do. If you’re at a smaller school or a Power 5 school, go and get it, don’t wait for the companies, they aren’t coming to you. Unless you’re a top quarterback at Alabama or a top running back at Clemson, or a top player that’s talked about, most likely companies aren’t coming to you, you have come to them. Companies want to see you go out there and get it yourself anyway, they want to wait. Companies want to see how you can approach them and be professional about it."

Smith said he signed with an agency to help him manage his NIL deals and contracts so he can focus on school. Although he is basking in the money he’s making off his endorsements, Smith acknowledged saving his money has a lot of benefits in the short and long term.

"Saving is a big part of my family. We know how to save already, my mom taught me how to save. I just think saving is a common sense thing because you never know what’s going to happen later in life. And when it comes to taxes, I asked my agent a little bit about how to do things, I’m still getting used to it, I recently turned 21. I’m still learning the basics and how to maneuver money and how to do my taxes on my own while learning from others."

Recruiting is one of the biggest tools coaches and scouts utilize to bring in top talent to their programs, but Smith believes NIL deals are playing a significant role. He cited an example of a player signing a $9.5 million NIL deal to attend the University of Miami.

"With NIL deals there are two ways to look at if it’s used in a good or bad way. NIL is for marketing yourself and building your brand, but on the other side, boosters are coming together to recruit top athletes, and at the end of the day, there’s nothing wrong with that. Other athletes coming to universities will want the same kind of deals that another athlete has, and there could be an issue with that. Hopefully, there’s a NIL law where you can’t do certain things, if not, we’ll see where it takes us in the next 10-20 years."

The Richmond, Virginia, native believes athletes can acquire endorsement deals regardless of the school they attend. He said his endorsement success while playing at an HBCU not only brings exposure to athletes at black colleges, but to others at smaller schools across the country.

"I paved the way for a lot of athletes. I’ve shown that you can get NIL deals at a smaller school. So, there’s no excuse why you can’t get a deal. All you have to do is put yourself out there, and you have to want to post content. If you want to reach out to the companies, email them. They’re not coming to you, you have to go to them, and you have to go a different route if you’re not at a Power 5 school. Athletes at Power 5 schools can wake up and have an NIL deal sitting on the table. Well, we have to go to them and compose ourselves and send them a proposal and show them why they want to partner with us."

Smith said he has three years of eligibility at Norfolk State after undergoing surgery in March. He’s taking time off to recover and is not playing football this season so he can concentrate full-time on track when the season starts. He is set to graduate from Norfolk State in 2023 and told FOX Television Stations he plans to explore other opportunities during that time.

Last month, Smith won the "Hustle Award" based on his endorsement success at the inaugural NIL Summit in Atlanta.

After one year of NIL deals, how much have athletes made?

After the first year of NIL, football and men’s basketball still claim the throne for the number of deals and average compensation, and social media remains the most popular way to get that NIL money. The total amount spent was about $917 million, NIL platform Opendorse estimated.

An average football deal comes out to nearly $3,400 on two platforms. And while softball and women’s basketball generally landed in the top five overall, when you subtract football, women’s sports are getting more deals than men’s sports, Opendorse said. Female gymnasts make big bucks, too: about $7,000 on average per deal, according to NIL platform INFLCR.

A full accounting of the first year of NIL, from July 1, 2021, to June 30, is hard to come by, for numerous reasons. The majority of schools don’t make public the number of deals and amounts their athletes have received (though a couple have divulged some information in what could be considered recruiting or marketing strategy). 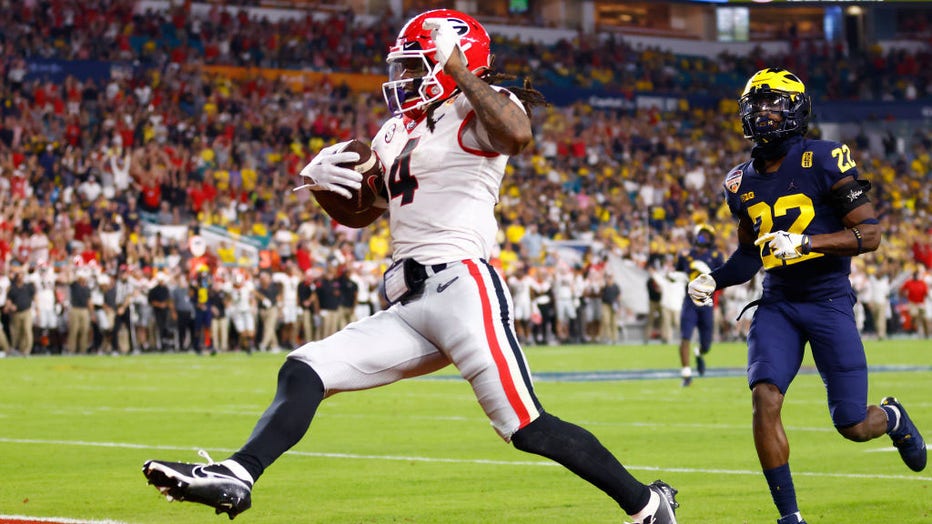 FILE-James Cook #4 of the Georgia Bulldogs celebrates a touchdown against the Michigan Wolverines in the College Football Playoff semifinal game in 2021. (Michael Reaves/Getty Images)

What lies ahead for Year 2, beyond maybe new laws or group licensing? Opendorse thinks it's the potential of NIL spending topping more than $1 billion.

An estimated $607.4 million could go to Power Five schools, with an average annual compensation $16,074 per athlete, Opendorse said. Already, about three-fourths of the known or forming collectives, which are third-party NIL kingmakers made up of school donors and boosters, are connected to Power Five schools.

Athletes' deals with brands — from financial businesses to apps to fashion — will likely rise, too. Opendorse projects that brand deals will encompass 64% of all NIL compensation in Year 2 and bring in about $730.4 million.

Football NIL deals tend to be hefty, with an average of $3,390.95 on Athliance and $3,396 on INFLCR. Opendorse broke down average compensation per football position, ranging from $403 for a specialist, $758 for the defensive line and $2,128 for quarterback.

Women's sports overall received $1,084 on average for an NIL deal, per INFLCR, with women's gymnastics soaring to a $7,054 average. 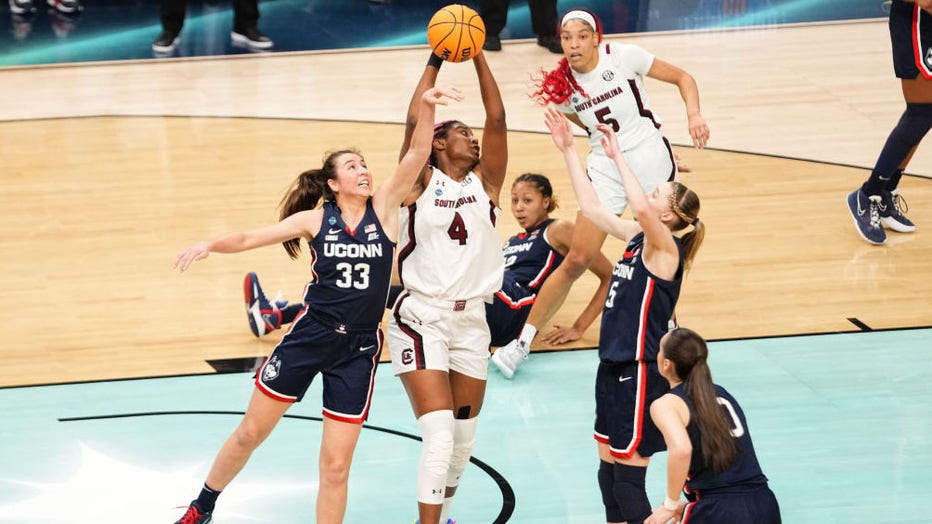 FILE-Aliyah Boston #4 of the South Carolina Gamecocks grabs a rebound over Caroline Ducharme #33 and Paige Bueckers #5 of the UConn Huskies during the women's NCAA championship game in 2022. (Ethan Mito/NCAA Photos via Getty Images)

Donor money also favors men's sports — a whopping 93% of it, Opendorse said. The average monthly compensation from donors at the DI level is $1,012.

Meanwhile, 91% of all women’s NIL activities are brand-related on Opendorse's platform, but 62% of all brand compensation went to men's sports.

What are you doing for your dough?

Social media remains supreme for NIL activity/transactions — 67.6% from Opendorse and 61% from INFLCR, both as of June 30. The average value of a social media NIL transaction is $905 and the median is $50, INFLCR said. 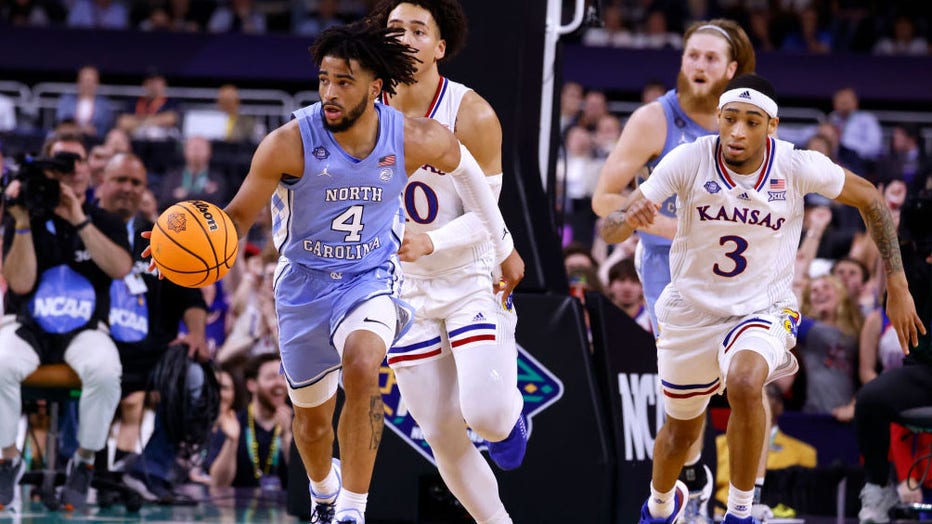 Multi-activity brand endorsement — endorsing something more than once — has a major share in Opendorse's platform at 24.4% of NIL compensation. When it comes to brand activity, 36.73% is licensing rights for an average of $9,877 per deal and 34.19% is posting content with an average of $156 per post.

What the schools have divulged

Kansas athletes inked 219 deals from July 1, 2021, to May 5 — a period that includes the Jayhawks winning the men's NCAA basketball tournament — for a total value of $380,915.01, according to public records obtained by the Topeka Capital-Journal. The majority of deals were for less than $1,000.

At least one Kansas athlete from all 18 sports had at least one deal, according to a recent release from the school.