MADISON, Wis. - MADISON, Wis. (AP) — Coach Jim Harbaugh and No. 14 Michigan found a formula to shut down the Wisconsin rushing attack that had embarrassed the Wolverines the last couple of years.

"Against a tough, physical team, I thought our team played really physical," Harbaugh said. "We matched it every bit."

And once Wisconsin quarterback Graham Mertz went down with a chest injury, the Badgers' chances of continuing their recent run of home domination in this series pretty much disintegrated.

Cornelius Johnson caught both of Cade McNamara’s touchdown passes and Michigan remained unbeaten Saturday with a 38-17 victory over Wisconsin, marking the Wolverines' first victory at Camp Randall Stadium since 2001. 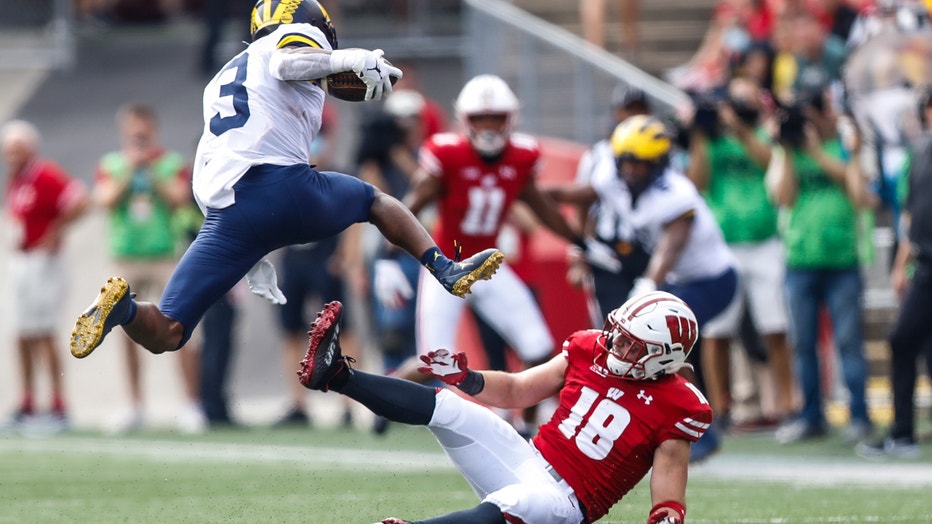 Wisconsin (1-3, 0-2 Big Ten) trailed 13-10 when Mertz and tight end Jake Ferguson left with chest injuries early in the third quarter. Mertz got hurt when he was sacked by Daxton Hill.

After Mertz and Ferguson departed, Michigan (5-0, 1-0) scored 25 straight points to put the game out of reach.

"It didn't make a difference who was on the other side of the ball," said Michigan linebacker David Ojabo, who had 2 1/2 of the Wolverines' six sacks. "It was just a relentless effort."

Badgers coach Paul Chryst said Mertz went to the hospital for evaluation but otherwise had no immediate update on either injury.

Saturday’s game marked a dramatic reversal from the last two meetings between these teams.

Michigan was supremely confident despite having lost in each of its last five trips to Madison. During the traditional playing of "Jump Around" after the third quarter at Camp Randall Stadium, the Wolverines jumped right along with all the Wisconsin students.

Most of those students departed by the time Michigan built a 28-point lead in the fourth quarter.

"We wanted to be up the entire game and then steal their juice," Hill said. "And that’s what we did."

The Badgers have lost by over 20 points each of the last two weeks. They gave up the final 31 points in a

"You can't get numb to this, this pain on the inside that we have," Wisconsin safety Collin Wilder said. "We've got to hold on to that, the bad taste in our mouths. We can't get used to losing like this."

Chryst was asked after the game whether it's fair to say the Badgers lack an identity on offense.

Michigan led 10-0 and outgained Wisconsin 122 yards to minus-2 for the first 20-plus minutes of the game. An 18-yard touchdown pass from Mertz to Dike with seven seconds left in the half got Wisconsin within 13-10.

But once Mertz got hurt, the Badgers never threatened again.

"The difference in us this year is that when we’re in a fight, we’re confident we’re going to win that fight," McNamara said. "This team didn’t panic at all when the fight came to us."

Wisconsin honored former coach and athletic director Barry Alvarez during a halftime ceremony. Alvarez stepped down as coach in 2005 and

Michigan: The Wolverines had run the ball on 74% of their snaps this season heading into Saturday, but they changed their strategy against a Wisconsin run defense that ranked first in the nation. McNamara hadn’t thrown more than 16 passes in any of Michigan’s first four games. … The Wolverines went 4 of 5 on fourth-down conversions, including McCarthy’s touchdown run.

Wisconsin: After being ranked 12th to start the season, the Badgers have dropped three of four games and now must worry about how soon they’ll get Mertz or Ferguson back. Wisconsin has lost eight of its last 13 games and has dropped eight straight to ranked teams. … The Badgers played without usual starting center Joe Tippmann, who was poked in the eye during pregame warmups.

Michigan: At Nebraska on Saturday.

Wisconsin: At Illinois on Saturday.