It was the largest margin of victory for Michigan State (2-0) since beating Eastern Michigan by 59 points in 2014.

Kendell Brooks, filling in for injured starting safety Xavier Henderson, forced the ball out twice in the first quarter. He has forced three fumbles in the Spartans' first two games.

On Akron’s opening drive, the senior safety knocked the ball loose from tight end TJ Banks and linebacker Cal Haladay picked up the ball and ran 22 yards to the Michigan State 41. Six plays later, Jarek Broussard scored on a 1-yard run. Haladay later forced a fumble in the second half when he sacked backup quarterback Jeff Undercuffler. 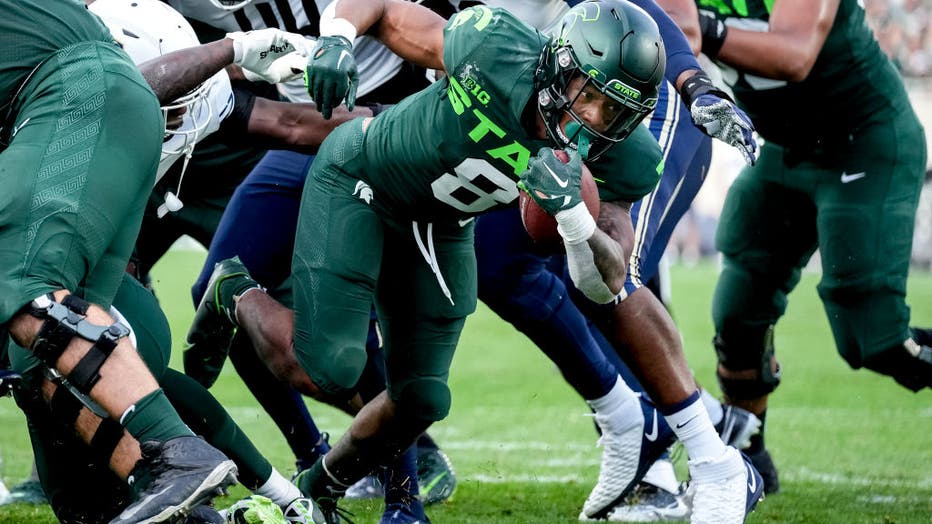 EAST LANSING, MICHIGAN - SEPTEMBER 10: Jalen Berger #8 of the Michigan State Spartans scores a touchdown against the Akron Zips during the third quarter at Spartan Stadium on September 10, 2022 in East Lansing, Michigan. (Photo by Nic Antaya/Getty Im

Brooks also punched the ball out from receiver Shocky Jacques-Louis, leading to a 1-yard touchdown run by Berger.

Jacoby Windmon, who had four sacks against Western Michigan last week, forced his second fumble in two games when he pounced on a bobbled pitch to Jonzell Norrils and Berger followed with his second score on another 1-yard run.

The Spartans continued the scoring in the second half with a 16-yard touchdown pass from backup quarterback Noah Kim to Tre Mosley, 2-yard touchdown runs by Broussard and Berger, and a 1-yard run by Elijah Collins.

Akron (1-1) starting quarterback DJ Irons was knocked out of the game with just over six minutes left in the first half. The Big Ten Network broadcast reported that he was taken to a hospital with a lower body injury.

Michigan State’s leading receiver Jayden Reed suffered a cut on his back late in the first half when he was pushed out of bounds and was held out of the second half.

Akron: With Irons knocked out of the game after completing 9 of 13 passes for 123 yards and running for 31 yards, the Zips could not move the ball much.

Michigan State: Even though he completed 18 of 28 passes for 212 yards, quarterback Payton Thorne continued to miss open receivers for the second straight game and threw two interceptions.

The Spartans were expected to win convincingly against the Zips and may actually move up slightly in the poll.

Michigan State: Goes on the road Sept. 17 to play Washington and hosts Minnesota on Sept. 24 in both teams’ Big Ten openers.

EAST LANSING, MICHIGAN - SEPTEMBER 10: Jalen Berger #8 of the Michigan State Spartans scores a touchdown against the Akron Zips during the third quarter at Spartan Stadium on September 10, 2022 in East Lansing, Michigan. (Photo by Nic Antaya/Getty Im