Rashad Williams scored 23 of his 36 points in the first half for Oakland, his second straight huge game against a big-name opponent. The Golden Grizzlies (0-7) trailed by one shortly after halftime before Michigan State (6-0) quickly pushed the lead into double digits. 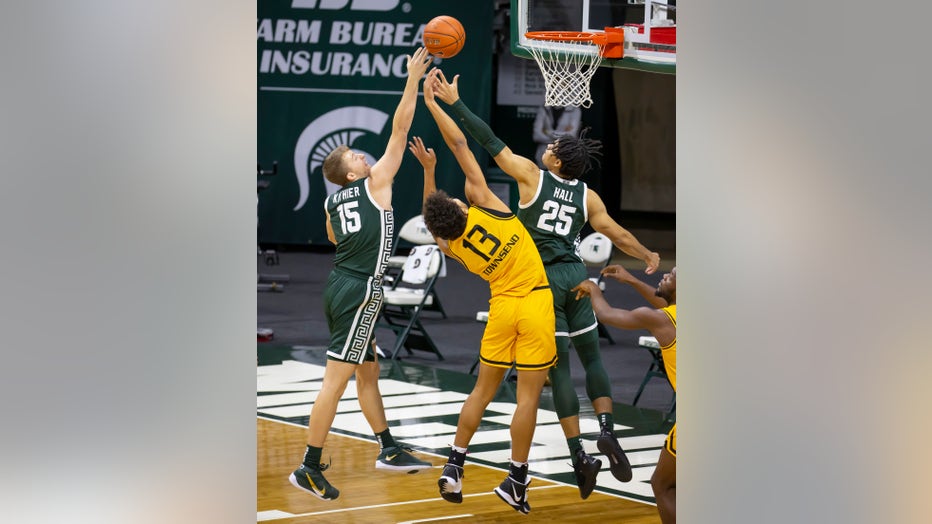 EAST LANSING, MI - DECEMBER 13: Trey Townsend #13 of the Oakland Golden Grizzlies battles for the ball between Thomas Kithier #15 and Malik Hall #25 of the Michigan State Spartans in the first half of a college basketball game at the Breslin Center o

Williams made 10 3-pointers in a 32-point effort at Oklahoma State on Dec. 5. He made six 3s in the first half Sunday, and Oakland trailed by just four at halftime despite struggling to keep Michigan State off the boards.

Williams made another quick 3 in the second half, and Jalen Moore's layup cut the lead to one at 46-45. Then Henry answered with a 3-pointer, and Langford made a layup and a 3 for the Spartans.

After his early 3 in the second half, Williams didn't score again until a three-point play with 10:35 to play.

Oakland has been limited by coronavirus-related problems and has been overmatched at times against a tough schedule. The Golden Grizzlies lost by 52 to Xavier, by 27 to Toledo and by 43 to Purdue.

But Oakland took Michigan to overtime before losing, and the Golden Grizzlies have been competitive against Michigan State in the past. They kept it close for a while Sunday before falling to 0-19 in this series.

Oakland: The Golden Grizzlies were outrebounded 52-20, and at times it felt like they couldn't stop Michigan State unless they forced a turnover. They can still be excited about what Williams has been able to do against good competition.

Michigan State: It was no surprise that this game against an in-state opponent was tough for a while. The Spartans had balanced scoring, with eight players scoring at least nine points.

Michigan State’s big test this week was supposed to be Wednesday at No. 18 Virginia, but that game was called off because of COVID-19 issues with the Cavaliers. The Spartans can expect to stay near the top of the poll until they lose.