ANN ARBOR, Mich. - Franz Wagner led a balanced scoring effort for No. 4 Michigan with 18 points, and the Wolverines opened Big Ten play with a 103-91 victory over Iowa on Friday night, overcoming 44 points by Luka Garza.

The Wolverines (8-1, 1-0) rebounded from their 58-43 loss to top-ranked Louisville on Tuesday night. In fact, Michigan exceeded its point total from Tuesday before halftime against Iowa. Garza scored 27 points in the first half, including 15 of Iowa's first 17, but it was the defensive end that prevented the Hawkeyes (6-3, 0-1) from winning this one.

Jon Teske and Zavier Simpson added 16 points each for Michigan, which had six players with at least 12.

Garza set a record for the most points by an opposing player at Michigan's Crisler Center, breaking the mark of 39 by Ohio State's Dennis Hopson in 1987. Connor McCaffery was the only other Iowa player in double figures with 12 points.

Michigan led 50-38 at halftime. Teske picked up his fourth foul with 11:17 remaining and Michigan up 74-61. Iowa cut the lead to seven, but Austin Davis, a backup big man for the Wolverines, contributed a layup and two dunks in a span of about a minute to help keep the Hawkeyes at bay. 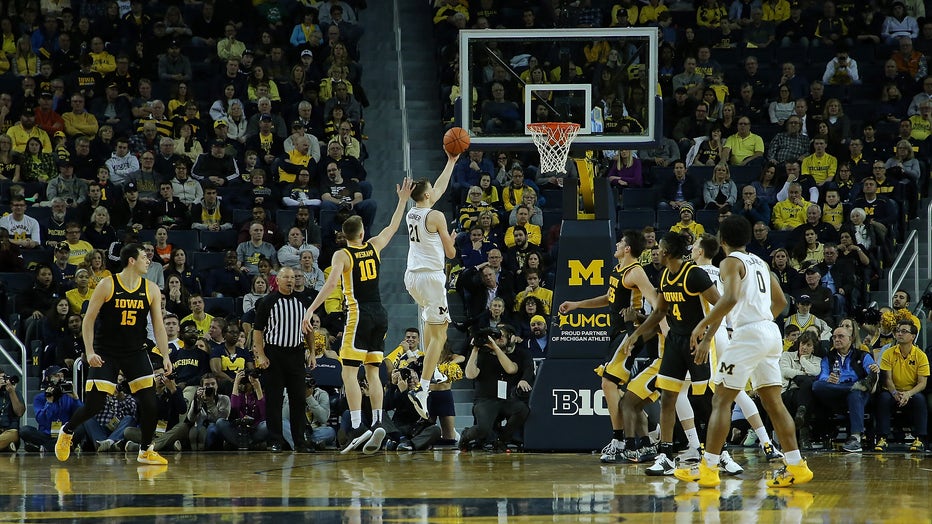 ANN ARBOR, MI - DECEMBER 6: Franz Wagner #21 of the Michigan Wolverines drives the ball to the basket during the second half of the game against the Iowa Hawkeyes at Crisler Center on December 6, 2019 in Ann Arbor, Michigan. Michigan defeated Iowa 10

Iowa: It was an impressive individual performance from Garza, who went right at the 7-foot-1 Teske early on and showed he could score consistently against a tough opponent. The rest of the Hawkeyes picked up the pace offensively in the second half, but no matter what they tried defensively - and they tried plenty of different approaches - it was no use.

Michigan: The Wolverines were sharp in responding to their first loss of the season, and there were plenty of contributors. Reserve forward Brandon Johns Jr. scored 10 points in the first half, and Davis filled in impressively when Teske was saddled with fouls.

Michigan might drop after its loss earlier in the week, but this impressive showing on offense takes some of the sting out of that tough night at Louisville.

Michigan: The Wolverines play at Illinois on Wednesday night.