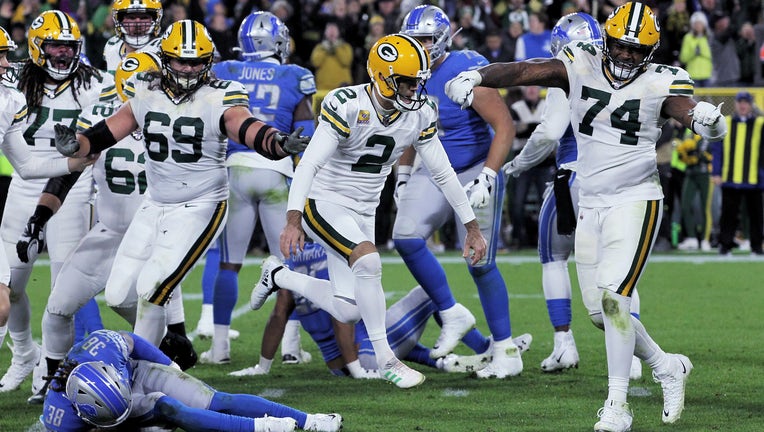 GREEN BAY, Wis. - Matthew Stafford and the Detroit Lions had a chance to build a big lead in the first half.

They had a chance to put it away in the second half.

When they left the door open for the Green Bay Packers, Aaron Rodgers took over.

Detroit settled for five field goals by Matt Prater and Lions defensive end Trey Flowers was whistled for a questionable penalty on each of Green Bay's last two drives, helping the Packers rally for a 23-22 victory Monday night.

"It all just comes down to finishing, that's a major part of it," receiver Kenny Golladay said. "Finishing the game out. Finishing offensively when we're in the red zone. Putting up points as touchdowns, not field goals."

The Lions were in position for a big NFC North road win after they opened a 22-13 lead with 12:17 remaining. Prater connected from 54 yards after Justin Coleman intercepted a Rodgers pass that went off Darrius Shepherd's facemask at the Lions 2.

But Detroit (2-2-1) was shut out the rest of the way, and Rodgers led the Packers on two scoring drives.

First, Rodgers threw a gorgeous 35-yard touchdown pass to Allen Lazard with 9:03 remaining. The Lions sacked Rodgers on third down earlier in the drive, but the Packers were awarded a first down when Flowers was flagged for illegal use of hands.

Green Bay (5-1) got the ball back with 6:46 left and went on a 14-play drive that ended with Mason Crosby's 23-yard field goal as time expired. Flowers had another illegal-use-of-hands penalty that helped the division-leading Packers run out the clock.

"I didn't think hands to the chest was a penalty," Flowers said. "I thought hands to the face, but I had him right here in the chest."

The pair of late flags on Flowers caught the attention of Hall of Fame running back and former Lions star Barry Sanders, who called the penalties "sickening" in a Twitter post.

Referee Clete Blakeman said each of the calls was made by umpire Jeff Rice, and he discussed the last one with him.

"Basically, it's for illegal use of the hands, hands-to-the-face foul," Blakeman told a pool reporter. "To be a foul, we basically need some forceful contact that's prolonged to the head and neck area of the defender.

"So, in his mind he had pinned him back, it was prolonged, and that's what created the foul."

Stafford was 18 of 32 for 265 yards, and Golladay finished with five receptions for 121 yards.

Detroit also recovered two fumbles, but was doomed by its inability to get the ball into the end zone after Kerryon Johnson's 1-yard touchdown run with 6:35 left in the first quarter helped the Lions build a 13-0 lead.

Green Bay got on the board on Rodgers' 5-yard TD pass to Jamaal Williams midway through the second quarter. The Packers were lining up for a field goal when the Lions were penalized for having too many men on the field, giving Rodgers and company another shot.

"We have a couple of different calls there in that situation, and one of the guys just didn't get the communication," coach Matt Patricia said. "We have to get that fixed and make sure that doesn't happen. We can't give Aaron Rodgers another chance."