DETROIT - Anton Lundell scored twice and the Florida Panthers extended their winning streak to 10 games with a 6-1 rout of the Detroit Red Wings on Sunday.

Anthony Duclair, Sam Reinhart, Maxim Mamin and Gustav Forsling also scored for the Panthers, who tied a franchise mark with their 22nd road win of the season. Spencer Knight made 33 saves.

Pius Suter scored and Alex Nedeljkovic had 33 saves for the Red Wings, who have allowed six or more goals for the 14th time this season.

Duclair snapped the scoreless tie at 5:02 of the second period when his shot from the right faceoff dot beat Nedeljkovic, increasing his career high with his 31st goal of the season.

Reinhart made it 2-0 just 90 seconds later when he scored his 28th goal of the season, extending his points streak to six games. 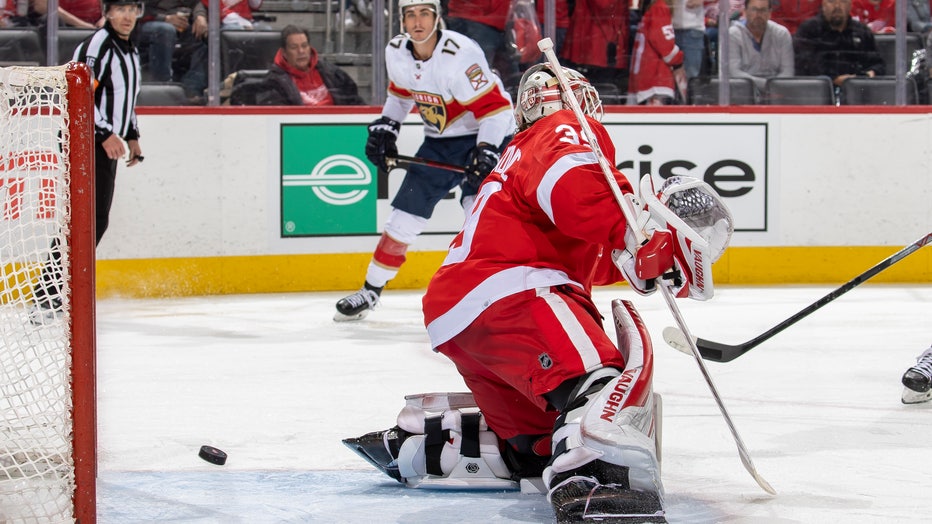 DETROIT, MI - APRIL 17: Sam Reinhart #13 of the Florida Panthers (not pictured) scores a goal on Alex Nedeljkovic #39 of the Detroit Red Wings during the second period of an NHL game at Little Caesars Arena on April 17, 2022 in Detroit, Michigan. (Ph

Lundell scored his first of the game at 14:23 of the second and Mamin followed 28 seconds later for a 4-0 lead.

Reinhart assisted on Lundell’s goal, giving him four goals and seven assists during his points streak.

While short-handed, Lundell scored his second of the game in the third period on a spectacular between-the-legs drop pass from Aleksander Barkov.

The Panthers also extended their team record for goals to 314, the most in the NHL this season.

Jonathan Huberdeau’s points streak ended at 13 games. He had 11 goals and 13 assists in that span.

Before the game, the Red Wings recalled right wing Riley Barber from the AHL’s Grand Rapids Griffins under emergency conditions. They also assigned center Chase Pearson to the Griffins.

Before the game, the Red Wings and Panthers honored referee Brian Pochmara for his 1,000th game. Pochmara, a Detroit native whose family was in attendance, received signed jerseys from both teams and a Tiffany crystal.