Marchand assisted on all four of Bergeron’s goals, Mike Reilly scored his first of the season and Charlie McAvoy had a pair of assists for Boston. Jeremy Swayman finished with 14 saves for the Bruins, who remained unbeaten at home and handed Detroit its fourth straight loss, the last three coming in regulation.

Lucas Raymond scored Detroit's goal, beating Swayman with a wrist shot with the Red Wings on a 5-on-3 power-play 7:46 into the third period. That made the score to 3-1, but Boston needed less than a minute before Reilly poked in a rebound and Bergeron added his fourth goal with 4:08 left to play.

The Bruins outshot the Red Wings 12-3 in the opening period and held Detroit to just six more in the second period. 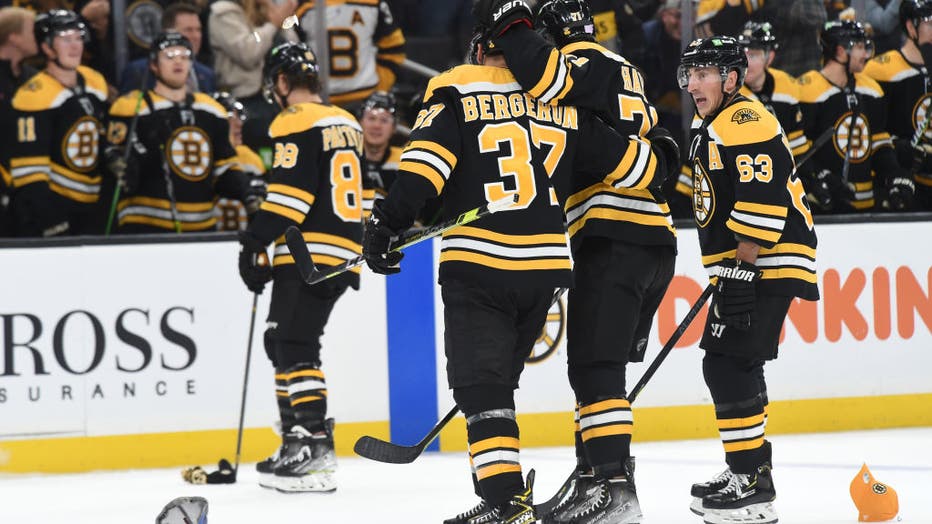 BOSTON, MA - NOVEMBER 4: Patrice Bergeron #37 of the Boston Bruins gets a hat trick against the Detroit Red Wings at the TD Garden on November 4, 2021 in Boston, Massachusetts. (Photo by Steve Babineau/NHLI via Getty Images)

Bergeron, the Boston captain who has played his entire career with the Bruins, entered the game with three assists and no goals through the first seven games. He had his seventh career hat trick secured before the end of the second period, beating Greiss on a wrist shot with 1:15 remaining.

It was also the third power-play goal of the night for the Bruins, who entered the game with three goals in 19 power-play opportunities through the first seven games.

Bergeron gave Boston its first lead 11:03 into the first with a shot from the slot off of passes from Marchand and McAvoy. Bergeron started the play with a face-off win and dropped the pass to McAvoy, who sent it back down to Marchand for a quick redirect to Bergeron for a one-timer that Greiss had little chance to stop.

Marchand and Bergeron worked the puck around for another power-play goal 10:52 into the second, when Marchand slipped a pass from behind the net to Bergeron in the slot as Tyler Bertuzzi sat out an interference penalty after Swayman came up with a big save on one of the few times he was tested.

Bertuzzi made a steal just outside the blue line and skated in on the Boston goal with Mitchell Stevens, who got off a shot that Swayman was able to drive away before Bertuzzi drew a penalty for interference, which resulted in Boston’s second power-play goal of the night.

Bergeron picked up his third 18:45 into the second, set up again between the circles on a pass from Marchand for a wrist shot that beat Greiss and triggered a flurry of hats coming from the seats. It took a few minutes to clear the headgear from the ice and play out the final 1:15 of the period.

Detroit, playing the third of four straight on the road, kept up with the Bruins through a choppy opening 10 minutes, then Boston took control.

NOTES: The Bruins held a pregame moment of silence for Jerry Remy, the former Boston Red Sox player and longtime broadcaster who died last week at age 68 after a battle with cancer. … Detroit captain Dylan Larkin missed his second straight game because of "personal reasons." … The Red Wings were without D Gustav Lindstrom, who was placed on injured-reserve Wednesday, retroactive to Oct. 24 with a lower-body injury. … Boston D Connor Clifton played in his 100th NHL game.