MONTREAL - Mathieu Perreault had a hat trick and the Montreal Canadiens beat the Detroit Red Wings 6-1 on Saturday night to end their season-opening losing streak at five.

Born and raised in Drummondville, Perreault is the first Quebec native to score a hat trick for the Canadiens at home since Vincent Damphousse in 1998.

"You don’t even dream about moments like that," Perreault said. "You just dream about being in the NHL, maybe have a chance to play for the Canadiensm but to actually score a hat trick in your home building, it’s not even stuff you dream about so it’s an unbelievable feeling.

"It’s something I may never experience again so I was just trying to take in as much out of it." 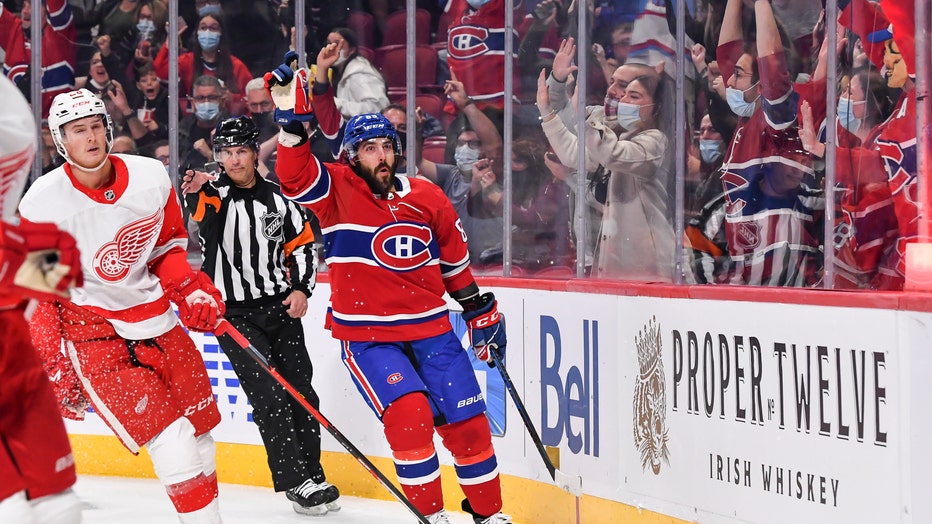 MONTREAL, QC - OCTOBER 23: Mathieu Perreault #85 of the Montreal Canadiens reacts as he celebrates his goal during the second period against the Detroit Red Wings at Centre Bell on October 23, 2021 in Montreal, Canada. (Photo by Minas Panagiotakis/Ge

"It’s good to get that first one but the one thing now, the reason it will make us better is that we don’t want to go back," Canadiens coach Dominique Ducharme said. "Nobody wants to have that feeling again. It was the longest 10 days."

Montreal gave up a power play early in the first period and the Red Wings took no time to find the opening goal, with Larkin beating Allen into the upper right-hand corner.

Ben Chiarot responded for Canadiens with 5:50 to go in the first period. The defenseman scored off a cross-ice pass from Jonathan Drouin.

The Canadiens scored two goals in a game for the first time this season when Hoffman connected on a power play.

Detroit: At Chicago on Sunday in the second of a three-game trip.

Montreal: Tuesday at Seattle to face the expansion Kraken.