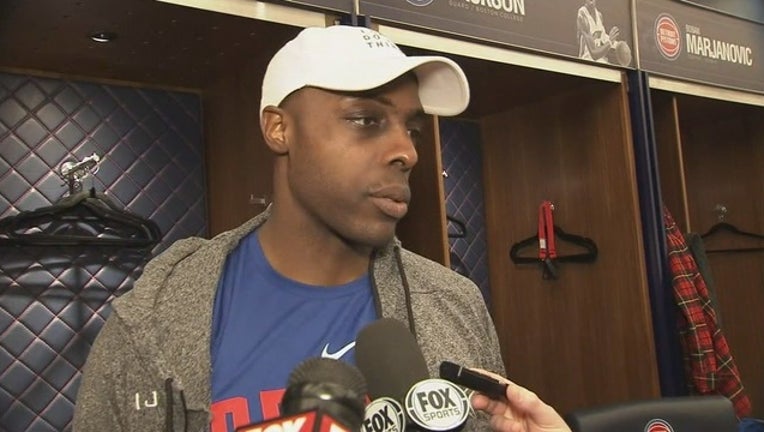 DETROIT (AP) - The Detroit Pistons are close to full strength now, and their performance of late reflects it.

It may be too late for any of that to matter.

Anthony Tolliver scored a season-high 25 points, and the Pistons made 13 3-pointers in the first half on their way to a 117-95 victory over the Chicago Bulls on Saturday night. Detroit has won three of four, with the only loss in that span in overtime at Houston, but the Pistons still trail Milwaukee by 5 1/2 games for the final playoff spot in the Eastern Conference.

"We're giving it our all when stepping on the floor," forward James Ennis said. "We have a goal right now and we have like nine games left so we've got to finish strong."

Reggie Jackson had 15 points in his third game back from an ankle injury. Aside from Jon Leuer (left ankle surgery) Detroit is pretty healthy at the moment.

The Pistons went 13 of 27 from 3-point range in the first half and led 66-47 after two quarters. Tolliver scored 16 points in the half.

Tolliver made six 3-pointers for the game and Reggie Bullock made four. The Pistons were 16 of 36 from beyond the arc through three quarters, but they missed all six of their attempts in the fourth. The franchise record for 3-pointers in a game is 17.

"We let them get comfortable at the start of the game," Bulls coach Fred Hoiberg said. "They hit some wide-open 3s, and it just snowballed on us from there."

The Bulls have lost five straight.

Andre Drummond had 15 points and 20 rebounds for Detroit. It was his 16th game this season with at least 20 rebounds and the 50th of his career.

Bobby Portis was held to 10 points for the Bulls, snapping a streak of seven straight games for him with at least 15. Chicago never led.

The Pistons had 21 assists on 26 field goals in the first half. They finished with 33 assists for the game.

"It was a good night," coach Stan Van Gundy said. "The ball moved, didn't even have to play Blake (Griffin) in the fourth quarter - it was a good game."

Valentine's brother, Drew, is an assistant coach at Loyola, which advanced to the Final Four on Saturday.

"This is crazy. I just got off FaceTime with him, and I know we just lost, but this has put a huge smile on my face," Denzel Valentine said. "I think I'm as excited right now as I was when we went to the Final Four, and that was the best basketball experience of my life. I might even have a chance to go down there and see them."

Denzel Valentine made the Final Four as a player at Michigan State.

Pistons: F Stanley Johnson left the game with a right gluteal strain. ... The Pistons did set a franchise record for 3-pointers in a half.