The Pistons hadn't won since Feb. 5, when they beat Phoenix 116-108 in Detroit. They got the best of the Suns once again and picked up a road victory for the first time since Jan. 18. 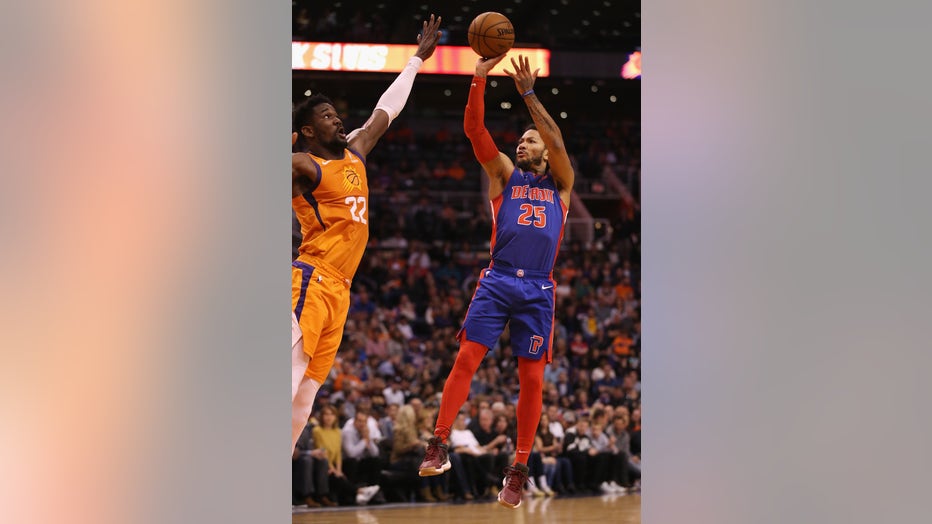 PHOENIX, ARIZONA - FEBRUARY 28: Derrick Rose #25 of the Detroit Pistons attempts a shot over Deandre Ayton #22 of the Phoenix Suns during the first half of the NBA game at Talking Stick Resort Arena on February 28, 2020 in Phoenix, Arizona. NOTE TO U

It was also the first time Detroit won since dealing star center Andre Drummond to Cleveland at the trade deadline. The rebuilding Pistons leaned on the veteran combination of Rose and Knight in the fourth quarter to stop their skid.

The Pistons led 109-98 with 2:37 remaining but the Suns responded with nine straight points to make things interesting.

Detroit had the ball with a 113-111 lead and just 1.9 seconds left, but the Pistons threw a bad inbounds pass and the Suns grabbed the ball before calling a quick timeout. Devin Booker had a chance to win it for the Suns, but couldn't get a shot off before time expired.

Rose made two clutch baskets in the final minute to keep the Pistons ahead. Knight scored 11 points in the fourth quarter.

It was another frustrating loss for the Suns, who are running out of time to get back into contention for a Western Conference playoff spot. Booker led Phoenix with 26 points while Deandre Ayton added 20 points and 10 rebounds.

Phoenix had a 53-52 lead at halftime. Ayton led the Suns with 14 points on 7-of-7 shooting before the break. Rose had 12 points and Sviatoslav Mykhailiuk scored 11 for the Pistons.

Suns: Kelly Oubre Jr. missed his second straight game with a right knee injury, and coach Monty Williams is unsure when Oubre will return. He is the team's third-leading scorer, averaging 18.7 points per game. ... Rookie forward Cameron Johnson hit the floor hard in the first quarter and had to leave the game for X-rays, but returned in the second quarter.

The Pistons wrap up their four-game road trip at Sacramento on Sunday.

The Suns host the Warriors on Saturday.