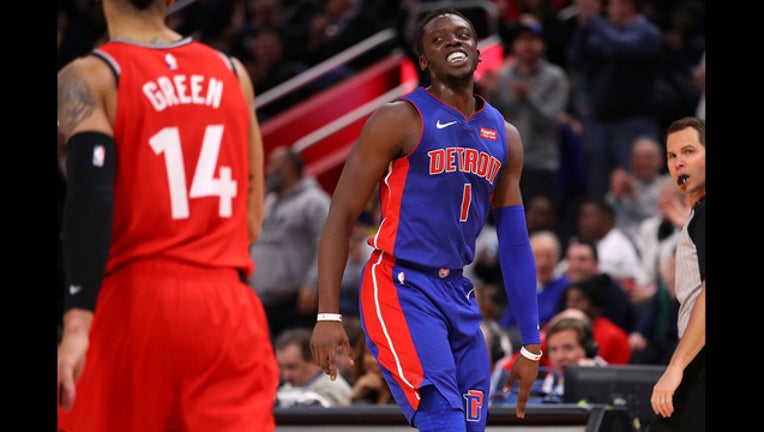 DETROIT, MICHIGAN - MARCH 03: Reggie Jackson #1 of the Detroit Pistons reacts to a second half three point basket while playing the Toronto Raptors at Little Caesars Arena on March 03, 2019 in Detroit, Michigan. (Photo by Gregory Shamus/Getty Images)

DETROIT (AP) - Blake Griffin scored 14 of his 27 points in the first quarter and the Detroit Pistons finished with plays at both ends of the court to beat the Toronto Raptors 112-107 in overtime on Sunday night.

Detroit took advantage of Toronto resting star forward Kawhi Leonard less than 48 hours after he made the go-ahead shot in the closing seconds of their win over Portland.

The highly charged, closely contested game in Detroit may be a first-round matchup in the Eastern Conference playoffs.

Both teams had chances to win in regulation, and in the extra period.

Reggie Jackson put the Pistons up 96-91 with 1:56 left and turned the ball over on a no-look pass on their next possession. Lowry scored Toronto's next five points and OG Anunoby tipped in a shot with 25.6 seconds left to tie the score at 100.

Lowry had the Raptors' first seven points in overtime, giving them a 107-102 lead with 2:22 remaining. The cushion wasn't big enough.

Lowry scored a season-high 35 points and Pascal Siakam had 21 points.

Detroit led by 13 points in the opening quarter and didn't trail until Marc Gasol made a 3-pointer with 8-plus minutes left in the third.

Raptors: Jeremy Lin started in Leonard's place and was 0 for 8 and scored only one point. .... Leonard went through a workout on the court before the game and studied previous games on a laptop in a front-row seat.

Pistons: Luke Kennard became the 10th player in franchise history to make at least five 3-pointers in two straight games and finished with 19 points. ... Reggie Bullock, who now plays for the Los Angeles Lakers, made the winning shot as time expired in November when Detroit won at Toronto 106-104 as Dwane Casey made an emotional return to face his former team.