DETROIT - Brayden Point scored a power-play goal at 2:28 of overtime and the Tampa Bay Lightning snapped a three-game losing streak with a 2-1 win over the Detroit Red Wings on Saturday.

Point scored on a rebound of Steven Stamkos' shot. Stamkos scored a third-period, power-play goal for the Lightning, while Anthony Cirelli assisted on both goals.

Brian Elliott, who was making his first start since March 12 and just his fifth since Dec. 31, stopped 26 shots.

Oskar Sundqvist scored the Red Wings goal and Alex Nedeljkovic made 34 saves. Sundqvist's goal was his second in three games since he was acquired in a trade with St. Louis on Monday.

The Lightning killed off two penalties in the first period. Elliott stopped Lucas Raymond with a glove save on the second of those Detroit power plays. 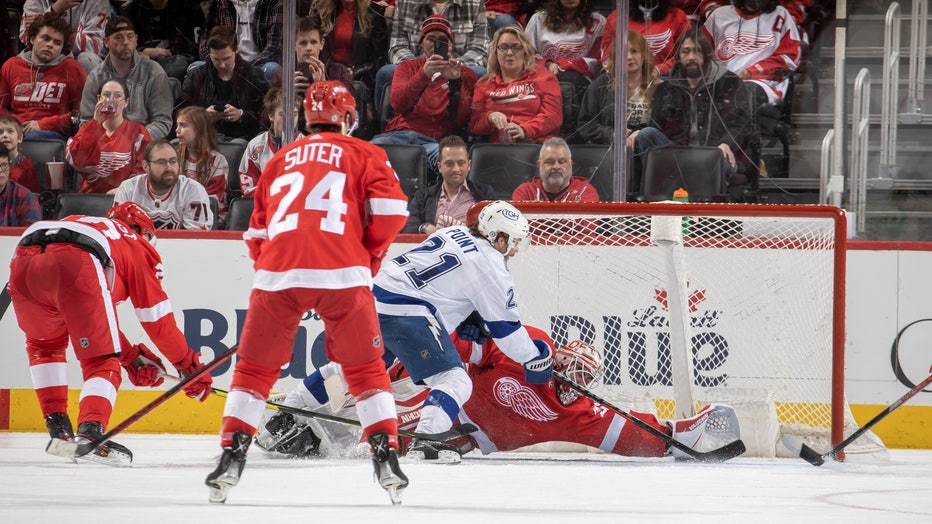 DETROIT, MI - MARCH 26: Alex Nedeljkovic (39) of the Detroit Red Wings makes a stretching glove save on Brayden Point (21) of the Tampa Bay Lightning during the third period of an NHL game at Little Caesars Arena on March 26, 2022 in Detroit, Michiga

Each team killed off a penalty in the second period. Tampa Bay committed two more minor infractions in the first three minutes of the third, but the Wings still couldn't get the puck past Elliott.

The scoreless tie was finally broken at 8:41 of the third period. Pius Suter dropped a pass to Sundqvist, whose shot trickled through Elliott's pads. Adam Erne earned the second assist.

Tampa Bay tied it with 4:38 remaining in regulation. Stamkos scored his 29th goal from the side of the net off a pass from Point.

Tampa Bay has scored two or fewer goals in seven of its past eight games. ... Tampa Bay D Ryan McDonagh missed the game with an upper-body injury. ... Tampa Bay is 10-6 in overtime, while Detroit dropped to 11-8.