DETROIT - Jordan Poole and Andrew Wiggins made the most of their opportunity to step up as scorers in Stephen Curry's absence.

Poole scored 22 of his season-high 32 points in the first half and Wiggins had 27, helping the Golden State Warriors beat the Detroit Pistons 105-102 on Friday night.

"I’m really proud of Jordan," coach Steve Kerr said. "He struggled the last few games. He was locked in right at the beginning."

Golden State started the fourth quarter with a 16-point lead and held on to win after Detroit's Jerami Grant and Frank Jackson missed 3-pointers in the closing seconds.

"I’ll be honest, that was the best feeling one I took all night," Jackson said. "I thought it was going in." 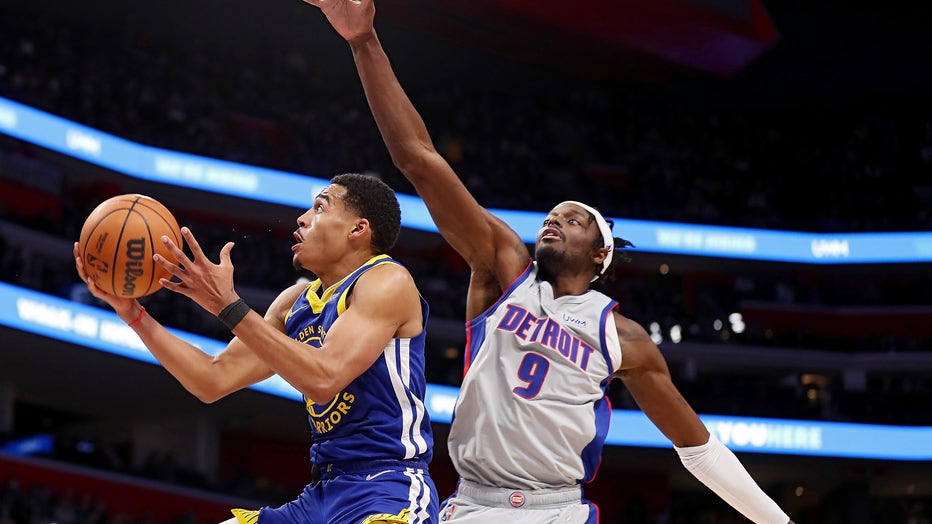 DETROIT, MICHIGAN - NOVEMBER 19: Jordan Poole #3 of the Golden State Warriors goes up for a layup against Jerami Grant #9 of the Detroit Pistons in the first half at Little Caesars Arena on November 19, 2021 in Detroit, Michigan. NOTE TO USER: User e

The NBA-leading Warriors sat out Curry with a bruised hip, a night after the two-time MVP and the league's leading scorer had 20 of his 40 points in a fourth-quarter comeback victory at Cleveland. They also also without Draymond Green because of a bruised thigh after he had 14 assists in 29 minutes against the Cavaliers.

The Pistons have just four wins and they picked up three of them over the previous five games for their best stretch of the season.

"We’ve gotten wins, but we keep coming back with losses," Cunningham said. "We have to find a way to string together some wins."

Gary Payton II started in place of Curry and scored 12 points and Nemanja Bjelica had 15 for the Warriors.

When Detroit coach Dwane Casey was asked before the game about the visitors that were sitting out, he said it should bother the Pistons. The rebuilding team, though, couldn't do much about it.

Poole had 11 points in the first quarter to help the Warriors lead 26-23. The former Michigan guard scored another 11 points in the second quarter, giving Golden State a five-point lead at halftime.

"It kind of feels like a homecoming," he said. "My parents were here and friends from school."

"Our start to the third quarter was very disappointing," Casey said. "I thought we’d come out with more juice and they came out guns blazing."

Late in the third while Golden State was pulling away, Curry in warmups and Green in casual clothes were standing up and cheering on their teammates.

Jackson led the Pistons' comeback in the fourth quarter, scoring in double digits to give them a chance to win.

"We competed and fought to get back," Casey said. "Those guys are heartbroken because they put themselves in a position to win and just couldn’t get that last shot to go in."

Warriors: Otto Porter (foot) and Andre Iguodala (right knee) also missed the game with injuries. ... Kevin Looney had 12 rebounds, his third game with double digits this season. ... Golden State has won three straight and 10 of its last 11 games. ... The Warriors, who are a league-best 14-2, are the only team in the league to score 100-plus points in each game this season.

Pistons: C Isaiah Stewart turned his right ankle early in the third quarter, kept weight off his right leg as he was helped off the court and was not cleared to return. "It really hurt our rebounds," Casey said. "We let them reload 14 times (with offensive rebounds) and it seemed like they turned every one of them into a 3. You can’t let teams do that 14 times." ... Detroit's depth at center was already thin with Kelly Olynyk out with a knee injury.