DETROIT - Kristaps Porzingis had 30 points and 10 rebounds and the Washington Wizards held on to beat the Detroit Pistons 100-97 on Friday night.

Marvin Bagley III led Detroit with 25 points, and Cade Cunningham added 22 points, nine rebounds and seven assists. Forward Jeremi Grant left in the first quarter with a strained calf and did not return.

After trailing by 17, the Pistons took a 91-90 lead on Saddiq Bey's 3-pointer with 5:01 to play, then added a lob from Cunningham to Bagley.

The Wizards countered, scoring the next six points. They took a 96-93 lead on Porzingis' dunk with 2:48 left. 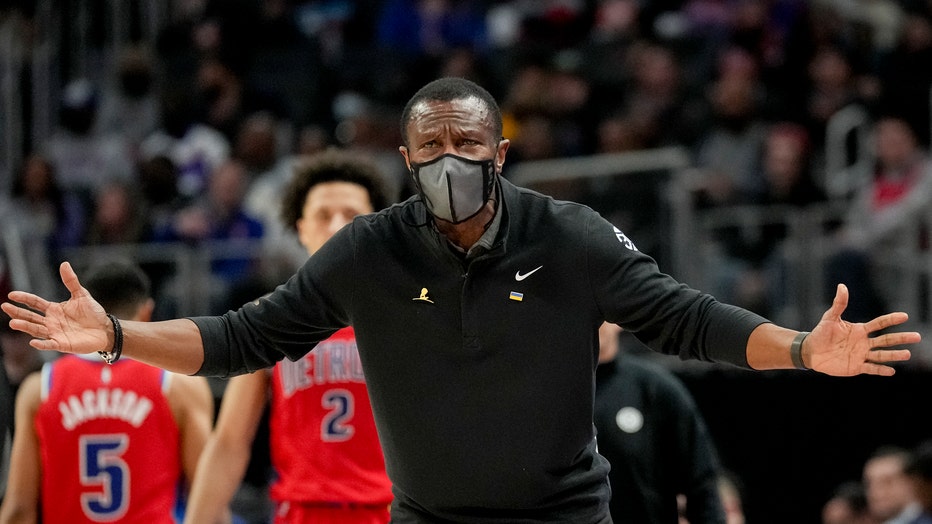 DETROIT, MICHIGAN - MARCH 25: Head coach Dwane Casey of the Detroit Pistons reacts against the Washington Wizards during the second quarter at Little Caesars Arena on March 25, 2022 in Detroit, Michigan. NOTE TO USER: User expressly acknowledges and

Cunningham's jumper made it 96-95, and after two Wizards misses, he put Detroit up 97-96 with 45 seconds left. Porzingis answered with a fadeaway jumper to give Washington a one-point lead with 29.5 seconds to play.

This time, Cunningham missed and the Pistons fouled Avdija, who made both shots to make it 100-97 with 11.4 seconds left. McGruder's off-balance 3-pointer missed, and Porzingis grabbed the clinching rebound.

Wizards: Washington has won five straight over the Pistons and has taken the season series in six of the last seven seasons.

Pistons: Said Friday that Hamdou Diallo will miss the rest of the season with a broken finger. Diallo averaged 11.0 points and 4.8 rebounds in 58 games.