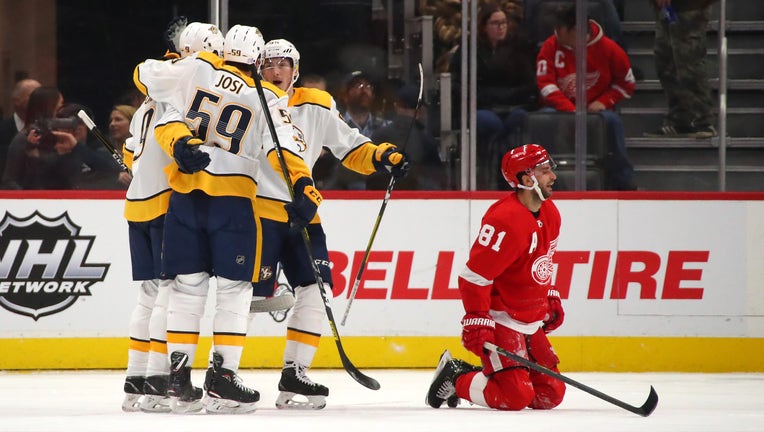 DETROIT, MICHIGAN - NOVEMBER 04: Matt Duchene #95 of the Nashville Predators celebrates his second period goal with teammates next to Frans Nielsen #81 of the Detroit Red Wings at Little Caesars Arena on November 04, 2019 in Detroit, Michigan. Nashvi

DETROIT - Matt Duchene figured the Nashville Predators deserved better after scoring just once in a loss to the New York Rangers over the weekend.

Duchene scored two of Nashville’s five second-period goals, and the Predators easily dispatched the Detroit Red Wings 6-1 on Monday night. One of Duchene’s goals came when he flung the puck from along the boards near the blue line. It deflected in off the stick of Red Wings defenseman Madison Bowey.

“I thought Saturday we did a lot of good things and probably should have scored that many goals ... and we ran into a hot goaltender,” Duchene said. “It’s nice to have a couple fluky ones, obviously, and kind of get, probably, what we deserved in the long haul. I think this game is funny. It can be fickle at times, but it has a funny way of coming back around.”

Nick Bonino, Kyle Turris and Colton Sissons contributed a goal apiece in the middle period, and Filip Forsberg added a goal for Nashville in the third. Andreas Athanasiou scored in the first period for the Red Wings, who are 1-10-1 in their last 12 games.

“This isn’t on one or two or three guys,” Detroit coach Jeff Blashill said. “We had a whole bunch of guys that couldn’t execute a tape-to-tape pass.”

The first four goals by the Predators came in a span of 5:36, and Detroit goalie Jimmy Howard was pulled after the fourth one.

Bonino scored his team-high eighth goal of the season, deflecting a point shot by Dan Hamhuis past Howard to tie the game at 1. Turris gave Nashville the lead 5:32 into the second, beating Howard to the glove side with a wrist shot from high in the slot. Sissons scored with a shot from the right circle 62 seconds later.

Detroit called a timeout, but it took the Predators only 62 more seconds to score again, when Duchene was the beneficiary of the favorable bounce off Bowey’s stick. Howard was yanked after making only 11 saves.

Detroit’s Dylan Larkin, who had only two penalty minutes on the season, was given an extra minor after a fight with Ryan Ellis. Duchene scored on a rebound during the ensuing power play.

Larkin said he thought his fight might spark his teammates, but it didn’t work out that way.

“It was tough that I got the extra two there, and then they go on the power play and score there quick,” Larkin said. “I’m not put in that position a lot. I’ve got to know the game more there.”

NOTES: The assist on Nashville’s first goal was the first point of the season for Hamhuis. He’s the 19th skater for the Predators with at least one point this season. That does not include goalie Pekka Rinne, who earned his second assist of the season on the goal by Sissons. ... Larkin was also assessed a double-minor for high sticking in the third period. ... Rinne made 23 saves a day after his 37th birthday. He still does not have a regulation loss this season.