New York - Mika Zibanejad had a goal and two assists, and Artemi Panarin and Chris Kreider each added a goal and an assist to help the New York Rangers return from an extended break and beat the Detroit Red Wings 4-2 Friday night.

Pavel Buchnevich also scored to start the Rangers’ three-goal second period, and rookie Igor Shesterkin stopped 23 shots. New York was off since a 4-2 loss to the Islanders on Jan. 21, getting time off for the All-Star break and subsequent bye week. 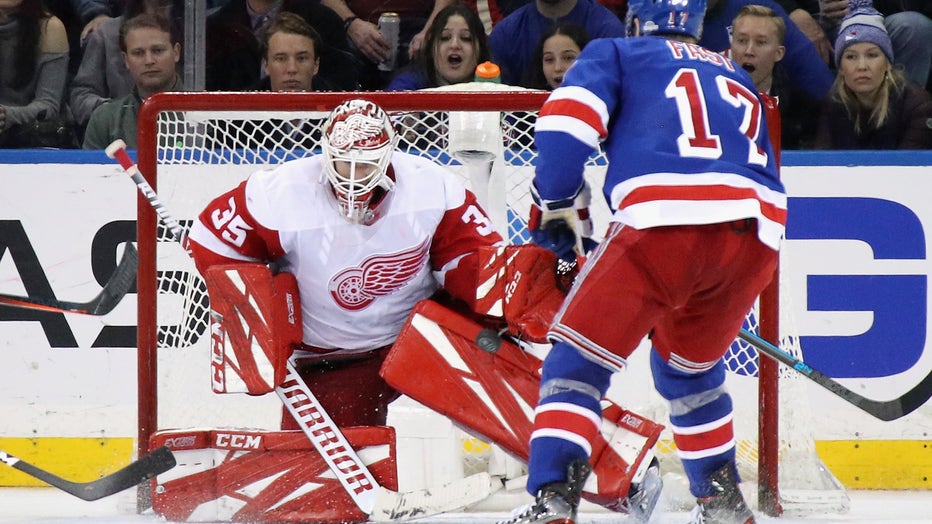 NEW YORK, NEW YORK - JANUARY 31: Jimmy Howard #35 of the Detroit Red Wings makes the save as Jesper Fast #17 of the New York Rangers looks for the rebound at Madison Square Garden on January 31, 2020 in New York City. The Rangers defeated the Red Win

“We did a good job in the second of controlling the game. We got the goals. It was a good win,’’ said Zibanejad, who reached the 200-point mark as a Ranger. “We know what’s ahead of us. We’re excited about it.”

Robby Fabbri had a goal and an assist and Valtteri Filppula also scored in the third period for the Red Wings, who lost their seventh straight (0-6-1). Detroit, playing for the first time since Jan. 22 for its extended break, has only 12 wins in 52 games.

The teams meet again on Saturday night in Detroit.

“They played really well. They worked us in the offensive as a five-man unit,’’ Howard said. “We have a unique opportunity to go at them tomorrow night. We have to show them better.”

After a scoreless first period in which Howard made 15 saves, Buchnevich broke through at 9:23 of the second, converting a slick cross-ice pass from Zibanejad for his ninth.

“Buchie did a really good job tonight and Kreids had a good night as well,’’ Rangers coach David Quinn said, referring to the strong play of his top line which also includes Zibanejad.

Panarin increased the margin to 3-0 with his team-leading 27th goal at 19:18, his fifth goal in his last seven games. Panarin has points in 37 of the 48 games he has played this season, including 23 of the Rangers’ 24 wins.

Panarin missed the Rangers’ last game before the break and then last weekend’s All-Star Game in St. Louis with an upper-body injury. He leads the Rangers with 70 points, fifth-best in the league.

Fabbri got the Red Wings on the scoreboard with his 12th at 5:59 of the third. Red Wings forward Dylan Larkin assisted on the goal for his 250th career point.

Filppula, playing his 999th career game, scored for Detroit at 10:59, his fourth of the season.

The 24-year-old Shesterkin was making his fourth start for the Rangers this month. He now has recorded wins in three as the Rangers improved to 6-2-0 in last eight home games. The Rangers have also allowed two goals or fewer in four of their last five games and they are 17-3-0 this season permitting two or fewer goals.

“The team really helped me,’’ Shesterkin said through an interpreter. “There were a lot of blocked shots today.”

Shesterkin also seemed to have his sights on a possible empty-net goal as the final seconds ticked off with Howard pulled for an extra skater.

“He was going for it. He might have just run out of time,’’ Rangers defenseman Marc Staal said. “Two-goal lead with 10 seconds left, you’ve got to go for it.”

Rangers: At Detroit on Saturday night.