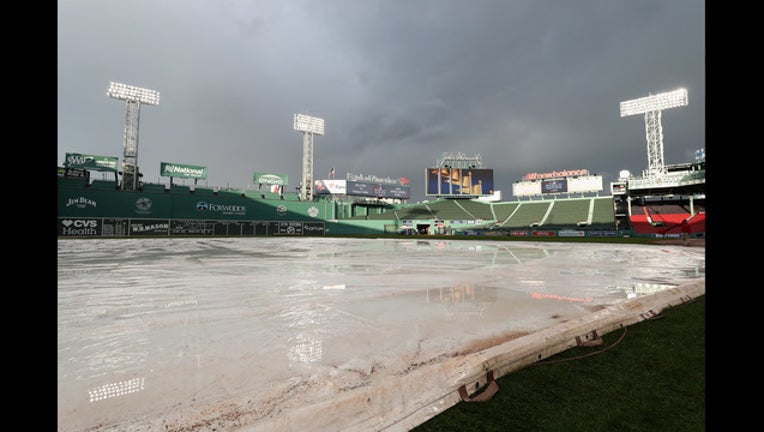 BOSTON, MA - OCTOBER 23: A rain tarp covers the field prior to Game One of the 2018 World Series between the Los Angeles Dodgers and the Boston Red Sox at Fenway Park on October 23, 2018 in Boston, Massachusetts. (Photo by Al Bello/Getty Images)

BOSTON (AP) - Boston right-hander Nathan Eovaldi is scheduled to have surgery to remove loose bodies from his pitching elbow, an operation expected to sideline the pitcher for four-to-six weeks.

The Red Sox said Eovaldi will have surgery on Tuesday, when the team plays a day-night doubleheader against Detroit following the rainout of the opener of the four-game series.

Eovaldi had similar surgery on March 30 last year while with Tampa Bay and made his season debut May 30.

Acquired by the Red Sox on July 25, Eovaldi went 3-3 with a 3.33 ERA in 12 games. He became a postseason star when he pitched six-plus innings of relief and threw 97 pitches in Game 3 of the World Series, an 18-inning loss to the Los Angeles Dodgers. That preserved the rest of the bullpen for the Red Sox, won beat the Dodgers in five games.

Chris Sale's wait for his first win of a frustrating season extended another day with the rainout. Sale is 0-4 with an 8.50 ERA in four starts since signing a $160 million, six-year contract.

"This is flat-out embarrassing," he said after an 8-0 loss to the New York Yankees last week. "For my family, for our team, for our fans. This is about as bad as it gets."

Sale had a season-high six strikeouts in New York and his fastball averaged 96 mph, up from 90-93 mph earlier this season.

"We have two different opinions of his outing," Red Sox manager Alex Cora said. "He felt like he disappointed his family. He's close. Stuff-wise he was great. I think he just misfired a few pitches, and they took advantage of it. But I think he's very close to taking off. The velocity is there, slider's there. The delivery is was more consistent. I know he wants to get on the mound."

Boyd is 1-1 with a 2.96 ERA in four starts, striking out 10 at Toronto in his season debut and 13 at the New York Yankees five days later. He became the first Tigers' pitcher since at least 1908 to reach double digits in strikeouts in his first two starts of the season.

Boston is coming off a three-game sweep at the AL East-leading Tampa Bay Rays, the first series win this season for the Red Sox. The Tigers won two of three in a rain-shortened series at home against the Chicago White Sox.