DETROIT - Lucas Raymond had a goal and two assists as the Detroit Red Wings beat Toronto 4-1 on Thursday night for their first victory over the Maple Leafs in nearly four years.

Robby Fabbri, Ben Chiarot and Moritz Seider also scored for Detroit and Ville Husso stopped 31 shots. Rasmus Sandin scored for the Maple Leafs, who had won three in a row.

Detroit’s previous win against the Maple Leafs was a 3-2 overtime victory on Feb. 1, 2019. Toronto had had won nine in a row in regulation over the Red Wings, outscoring them 48-21. 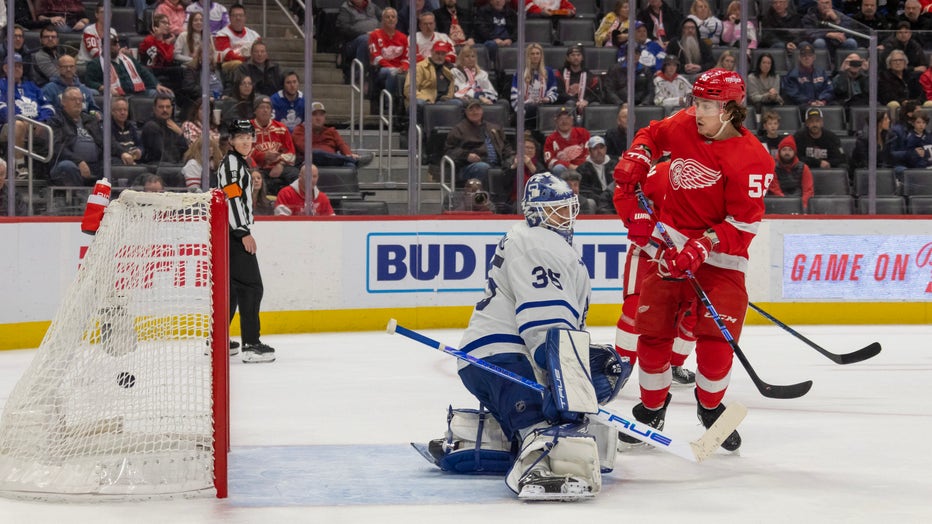 Raymond scored at 8:48 of the first period to put the Red Wings in front. It was his second goal in as many games and fourth in the last six games.

Detroit also led 1-0 Saturday at Toronto, but ended up losing 4-1. This time, the Red Wings took a 2-0 advantage at 3:49 of the second when Fabbri beat goaltender Ilya Samsonov on a power play.

Fabbri scored for the third time in four games since returning Jan. 4 from knee surgery.

Less than four minutes later, Toronto scored when Sandin’s shot from the point deflected off the stick blade of Detroit captain Dylan Larkin and past Husso.

In the third period, Chiarot scored an empty-net goal and Seider then beat Samsonov with 19.8 seconds to go.

Playing his second NHL game, Toronto forward Bobby McMann thought he’d scored his first career goal 56 seconds after the opening faceoff. After review, it was ruled that McMann had used a distinct kicking motion to direct the puck in the net and the goal was disallowed.

Samsonov made 19 saves for Toronto. The Leafs were 0 for 5 on the power play and Detroit was 1 for 5 with the man advantage.

The Maple Leafs played their second game without center Auston Matthews. The 2021-22 NHL MVP is out with an undisclosed injury that Toronto coach Sheldon Keefe indicated has to do with lingering issues. The Leafs are listing Matthews as day to day.