Brayden Point scored twice in a 1:14 stretch late in the game to pull the Lightning within one before they gave up an empty-net goal to Vladislav Namestnikov.

Tampa Bay entered the game 19-0-1 against the Red Wings over the last five years, and its 20-game point streak was the longest in franchise history against a team. Detroit had lost four straight overall. 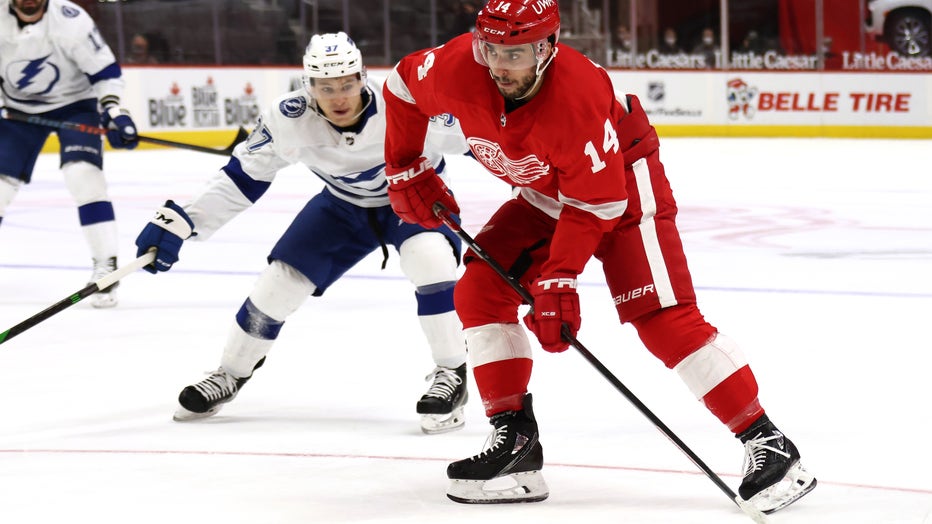 Curtis McElhinney gave up three goals on five shots in the opening period and finished with 17 saves in a rare start as the defending Stanley Cup champions rested Andrei Vasilevskiy as they closed a season-long, six-game road trip.

Troy Stecher, Dylan Larkin and Mantha scored to put the Red Wings ahead. Mikhail Sergachev and Steven Stamkos pulled the Lightning into ties during the opening period in which they outshot the home team 15-5 but trailed 3-2.

The Lightning had a lot of chances to cut into their deficit in the second period when Detroit was called for five penalties, including a pair of calls that gave them a 5-on-3 power play for 30 seconds, but could not take advantage.

Luke Glendening scored 33 seconds into the third period and Robby Fabbri scored shortly thereafter, giving the Red Wings a three-goal cushion that led to their eighth victory as they reached the midway mark of the 56-game schedule.

McElhinney was pulled to give Tampa Bay an extra skater when Point scored his second goal with 2:55 remaining. The backup goaltender later went to the bench again, and Namestnikov scored an empty-net goal, getting an unselfish assist from Mantha.

The Red Wings took advantage of not facing Vasilevskiy, who is 11-0 against them. Vasilevskiy won his seventh straight start in a 4-3

The Lightning will raise their Stanley Cup banner Saturday night when they play Nashville. Fans were unable to attend Tampa Bay's season-opening game two months ago, when the banner was originally scheduled be hoisted to the top of the team’s arena.

Detroit will resume its six-game homestand Sunday against Carolina, which has won seven straight to surge into first place in the Central Division.