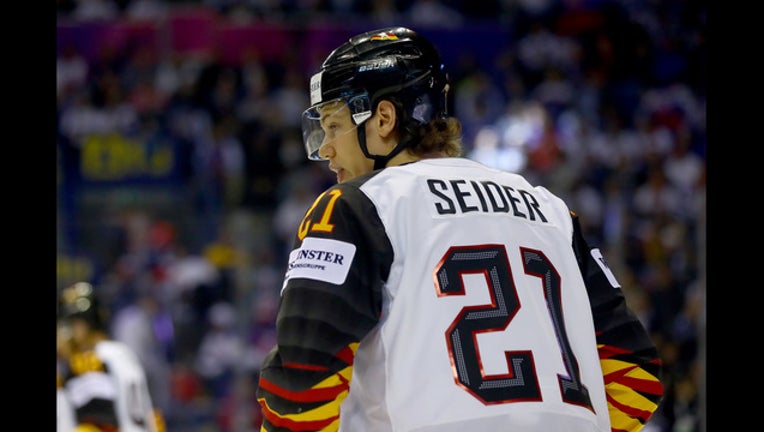 KOSICE, SLOVAKIA - MAY 15: Moritz Seider of Germany looks on during the 2019 IIHF Ice Hockey World Championship Slovakia group A game between Germany and Slovakia at Steel Arena on May 15, 2019 in Kosice, Slovakia. (Photo by Martin Rose/Getty Images)

VANCOUVER, British Columbia (AP) - Back home in Detroit, it took Steve Yzerman only a matter of minutes Friday in the NHL draft to put his imprint on the future of the Red Wings.

It came with the No. 6 overall pick and a selection that was unexpected. Moritz Seider, the newest member of the Red Wings, was even surprised.

"We had a couple of good meetings with Steve Yzerman and Yzerman wanted to know every single thing about me," Seider said. "But we saw a couple of rankings and I wasn't that high in any of them. I'm just excited. It's an unreal moment."

Instead it came in the first 45 minutes.

"I had no idea. Just shocked. My hands were shaking. My legs are still shaking," Seider said. "I looked at my mom and she was so shocked. I think she was more shocked and nervous than I am before. It was great to have them around."

Seider, a defenseman, was ranked as the sixth best European skater by NHL's Central Scouting Bureau. He was the rookie of the year in Germany's top league this past season playing for Mannheim, helping his team win the German championship. His measurable numbers fit the specs of what Yzerman would want in a defender - Seider is 6-foot-3 and 208 pounds.

Perhaps most important was the past year of experience for Seider. Not only did Seider play in the top pro league in Germany, but he also played in five games for his country at the IIHF World Championships.

"He has excellent hockey sense. Obviously a big kid at 6-foot-3. Real good skater. In our opinion he's one of the top defensemen in the draft," Yzerman said. "Our next pick was 35. We had to make a decision. He wasn't going to be there at 35."

Yzerman has a huge job ahead in trying to re-establish the Red Wings as one of the premier clubs in the NHL. After 25 straight playoff appearances, the Red Wings have failed to reach the postseason in the past three years. Yzerman won the Stanley Cup three times as Red Wings captain and is back in Hockeytown after eight years as Tampa Bay Lightning GM and another as an adviser.

And clearly Seider was his first target.

"I wasn't really going by position. I think anyone we would have picked we would have felt we were filling a need," Yzerman said.

Seider said his longest meeting at the NHL Scouting Combine was with the Red Wings and it was a sign of what was to happen. Both Yzerman and Seider were unsure if the 18-year-old would stay with Mannheim for another season or see if he was ready for the NHL.

"It went about 40 minutes and it was the last meeting so I think it stuck in my head for a long time," Seider said. "In the end I think there was just a little percentage in being drafted by Detroit, but I think in the end it worked out pretty well."