DETROIT - Rookie forward Elmer Soderblom’s fourth goal of the season snapped a tie early in the third period and gave the Detroit Red Wings the lead for good as they downed the Tampa Bay Lightning 7-4 on Wednesday.

With the victory, the Red Wings ended a season-high six-game losing streak (0-4-2). Their previous victory was a 4-2 verdict over the Lightning at Tampa Bay on Dec. 6. The Lightning are 7-3 in their last 10 games, with Detroit accounting for two of those losses.

Tampa Bay goalie Brian Elliott retrieved a loose puck behind his net and attempted to rim it around the boards. Detroit center Joe Veleno intercepted the puck and quickly fed Soderblom for the tap in into the vacated net 3:48 into the third. 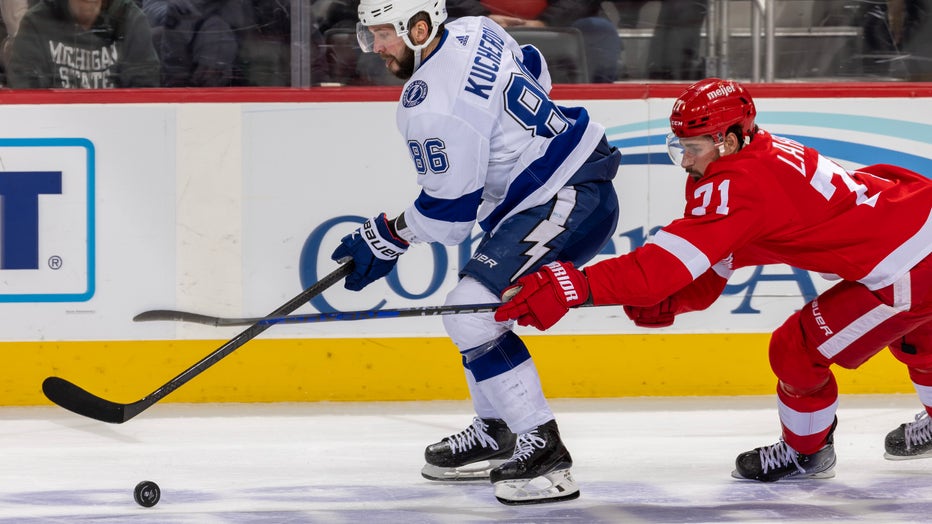 DETROIT, MI - DECEMBER 21: Nikita Kucherov #86 of the Tampa Bay Lightning skates up ice with the puck in front of Dylan Larkin #71 of the Detroit Red Wings during the first period of an NHL game at Little Caesars Arena on December 21, 2022 in Detroit

Detroit captain Dylan Larkin scored what proved to be the game-winning goal midway through the final period, giving the Red Wings a 5-3 lead. It was his second goal of the night and team-leading 12th of the season.

After pulling Elliott for an extra attacker, Nikita Kucherov scored for the Lightning to narrow Detroit’s lead to a goal. David Perron and Michael Rasmussen, with his second goal of the night, scored empty-net goals to ice the game for the Red Wings.

Larkin’s first goal of the night at 11:08 of the second period gave the Red Wings their first lead of the game at 3-2. But Tampa Bay’s Ross Colton pounced on a turnover by Detroit forward Adam Erne just over two minutes later to tie the score.

Brayden Point and Alex Killorn scored in the first period to twice give Tampa Bay one-goal leads. However, Olli Maatta and Rasmussen responded for the Red Wings and it was tied at 2 at the end of the period.

Tampa Bay went 0-for-5 on the power play, including a five-on-three advantage for 1:53 during the first period.

Elliott made 24 saves as he dropped to 8-2 on the season. Ville Husso had 34 stops in the Detroit net while ending a personal 0-3-2 slump.

Detroit has no timetable as to when forward Jakub Vrana might see game action. He rejoined the club last week after spending two months in the NHL/NHLPA Player Assistance Program.

Lightning: Tampa Bay’s game at Buffalo on Friday was postponed due to an impending winter storm and rescheduled for March 4. The Lightning are off until Dec. 28 when they host the Montreal Canadiens.

Red Wings: At the Ottawa Senators on Friday night.