Javier Báez reached base three times, Harold Castro hit a two-run single and Riley Greene scored twice for the Tigers, who came in having lost five of eight since the All-Star break.

The Blue Jays lost All-Star right-hander Alek Manoah in the sixth inning after he was hit on the right elbow by Jonathan Schoop’s comebacker. The team said X-rays revealed no fracture.

Matt Chapman homered for the third time in two games but Toronto managed only four hits against six Tigers pitchers. 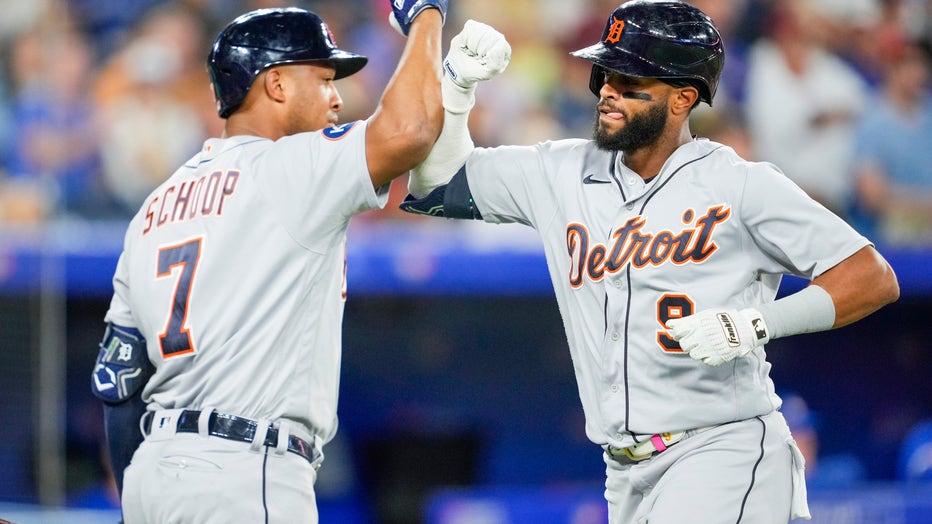 TORONTO, ON - JULY 29: Willi Castro #9 of the Detroit Tigers celebrates his home run with Jonathan Schoop #7 against the Toronto Blue Jays in the sixth inning during their MLB game at the Rogers Centre on July 29, 2022 in Toronto, Ontario, Canada. (P

Starting for the first time in his big league career, Tigers right-hander Bryan Garcia became the 15th different pitcher to start for Detroit this season. Garcia allowed two runs and three hits in 3 2/3 innings, leaving after Raimel Tapia’s RBI single in the fourth.

Will Vest (3-2) worked 1 1/3 innings, Jason Foley, Joe Jiménez and MIchael Fulmer each worked one inning, combining for seven strikeouts, and Gregory Soto finished for his 19th save in 22 chances.

Schoop’s one-hopper deflected off Manoah’s elbow to shortstop Santiago Espinal, who made the out at first as Manoah hopped off the back of the mound, grimacing in pain. Following a conversation with the trainer, a frustrated Manoah exited and was replaced by left-hander Tim Mayza.

Chapman gave Toronto the lead in the second with his 19th home run, but Greene and Reyes tied it with back-to-back doubles in the third.

Castro drove in a pair with a two-out single to right in the fifth, but Detroit left runners at the corners when second baseman Cavan Biggio made a diving play on Jeimer Candelario’s grounder.

Willi Castro made it 4-2 with a leadoff homer off Manoah in the sixth, his fourth.

Blue Jays: SS Bo Bichette (left shoulder) was held out of the starting lineup but came on as a pinch hitter in the ninth, ending the game with a fly out to deep center. Bichette was shaken up Thursday after he collided with OF Lourdes Gurriel Jr. while chasing a shallow pop fly. ... OF George Springer (right elbow) was held out of the starting lineup. Manager John Schneider said Springer was available to pinch hit.

When Reyes singled in the fifth, it snapped a streak of nine consecutive extra-base hits by the Tigers, dating to Reyes’ game-winning double Wednesday against San Diego. According to the Elias Sports Bureau, that matched the longest such streak in Tigers history, previously set Sept. 27-28, 2011.

Fifteen of Chapman’s 19 home runs this season have come at home.