DETROIT - Victor Reyes hit a pinch-hit tiebreaking inside-the-park home run in the eighth inning and the Detroit Tigers held on to beat the Toronto Blue Jays 2-1 on Friday night.

Reyes, hitting for Zack Short, led off the inning with a sinking drive to center. Josh Palacios missed a diving attempt at the catch and the ball rolled to the wall. Reyes tried to catch the Blue Jays off guard by hitting third base at full speed, and the aggressive baserunning paid off as Reyes slid safely under a high relay throw to the plate.

Jose Cisnero (3-4) picked up the win and Gregory Soto pitched the ninth for his 16th save. Tim Mayza (4-2) took the loss after allowing the Reyes home run. 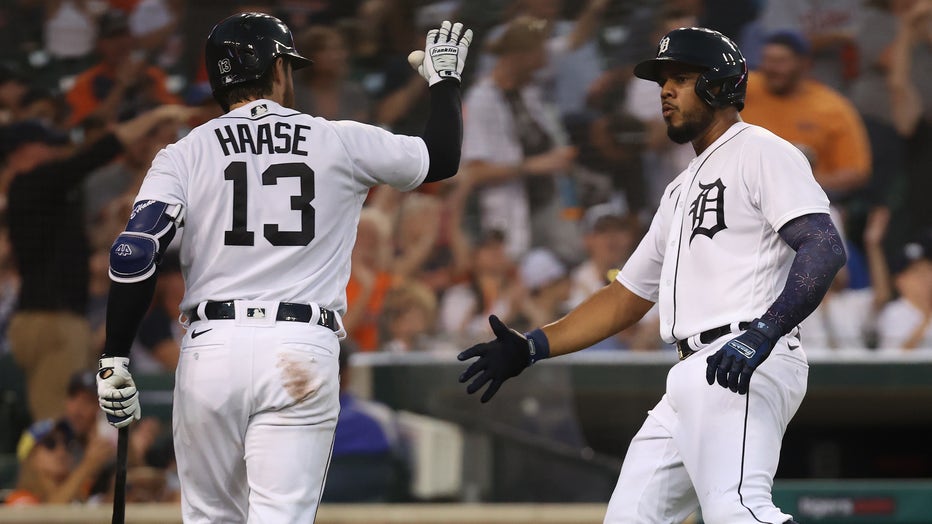 DETROIT, MICHIGAN - AUGUST 27: Jeimer Candelario #46 of the Detroit Tigers celebrates scoring a run with Eric Haase #13 in the fourth inning against the Toronto Blue Jays at Comerica Park on August 27, 2021 in Detroit, Michigan. (Photo by Gregory Sha

The Blue Jays took a 1-0 lead in the third on doubles by Bo Bichette and Vladimir Guerrero Jr.

Kevin Smith came close to making it 2-0 in the fourth, but Tigers centerfielder Derek Hill reached over the fence to pull back a potential home run ball. Instead, the Tigers tied the game in the bottom of the inning on an RBI single by Miguel Cabrera — the 2,959th hit of his career.

With one out in the seventh, Adam Cimber threw away a pickoff attempt at first, allowing Eric Haase to reach third. Cimber escaped the trouble on a grounder to the mound and a pop-up.

The Tigers celebrated Cabrera's 500th homer before the bottom of the first inning. Members of his family changed the counter in left-centerfield from 499 to 500, and he came out of the dugout for a standing ovation. Awkwardly, Matz had to watch the ceremony from the mound, five days after giving up the milestone homer in Toronto.

The sign was quietly changed to the current number - 501 - during the second inning.

The teams continue their weekend series on Saturday evening, with Detroit's Jose Urena (2-8, 6.19) scheduled to start against Alex Manoah (5-2, 3.18).