DETROIT - Robbie Grossman hit a leadoff homer and four Detroit pitchers combined on a two-hitter, leading the Tigers to a 1-0 victory over the Minnesota Twins in the opener of a split doubleheader on Saturday.

José Ureña started for the Tigers and pitched three innings of two-hit ball before departing due right groin tightness. Daniel Norris (1-3) then got six outs, Kyle Funkhouser struck out the side in the sixth and Gregory Soto worked the seventh for his eighth save. 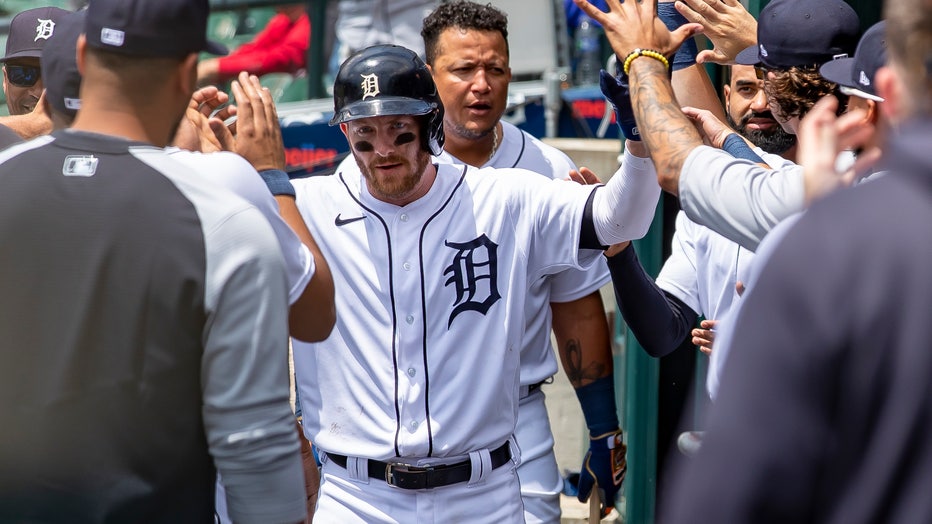 DETROIT, MI - JULY 17: Robbie Grossman #8 of the Detroit Tigers hi-fives teammates after hitting a solo home run in the first inning against the Minnesota Twins during game one of a double header at Comerica Park on July 17, 2021 in Detroit, Michigan

"Obviously, we needed our bullpen to pitch well and I think they wanted to prove something," Detroit manager A.J. Hinch said. "All three guys came in and were great."

The Twins were shut out for the fourth time this season. They swept a four-game home series from Detroit prior to the All-Star break.

"If you look at what both teams did offensively today through seven innings of play, they’re probably not the types of at-bats we’re used to seeing from some of these guys lately," Twins manager Rocco Baldelli said. "I’ll bet some of that is from five days off."

The teams were supposed to play a doubleheader on Friday, but it was postponed due to inclement weather.

"This was huge," Norris said. "That series back before the break, that hurt. It stung a bit because we’d been playing so well and we wanted to finish the first half on a high note. But they play good ball and they battle. So today was big to get that win and stop the bleeding a little bit."

"Got the first hitter out of the way," Barnes said. "Couldn’t do much worse than that and then we went from there. ... I made a bad pitch. Good pitches get hitters out and I didn’t make a good one."

Detroit put two runners on in the fourth and three in the fifth but failed to build on its lead.

It was the first game in franchise history in which the Tigers hit a home run in their first at-bat of the game, and went on to a 1-0 win. The last time it happened in the majors was Nick Markakis for Baltimore against Seattle on Aug. 3, 2014.

Twins: RHP Derek Law was placed on the 10-day injured list IL with a right shoulder impingement and LHP Danny Coulombe was placed on the paternity list. RHP Beau Burrows and LHP Juan Minaya were recalled from Triple-A St. Paul.

Tigers: OF Nomar Mazara was designated for assignment and INF Willi Castro was optioned to Triple-A Toledo. OF Derek Hill and INF Isaac Paredes were recalled from Toledo. … RHP Will Vest, a Rule 5 draft selection, was returned to Detroit from Seattle.

Twins: LHP Devin Smeltzer, who had been sidelined due to left elbow inflammation, is now dealing with a back injury, according to manager Rocco Baldelli.

Twins RHP Kenta Maeda (4-3, 4.66 ERA) will oppose Tigers LHP Tyler Alexander (1-1, 4.31 ERA) in the second game of the doubleheader. Maeda is 2-2 with a 3.86 ERA in six career starts against Detroit. Alexander will be making his third start this season but hasn’t pitched more than three innings.