Detroit - Evan Rodrigues had no goals in 25 games this season. Zach Bogosian had none in 15.

Those two droughts are over now.

Rodrigues scored twice in the first 5:00, and the Buffalo Sabres cruised to a 5-1 victory over the Detroit Red Wings on Sunday. Buffalo led 3-0 after one period. 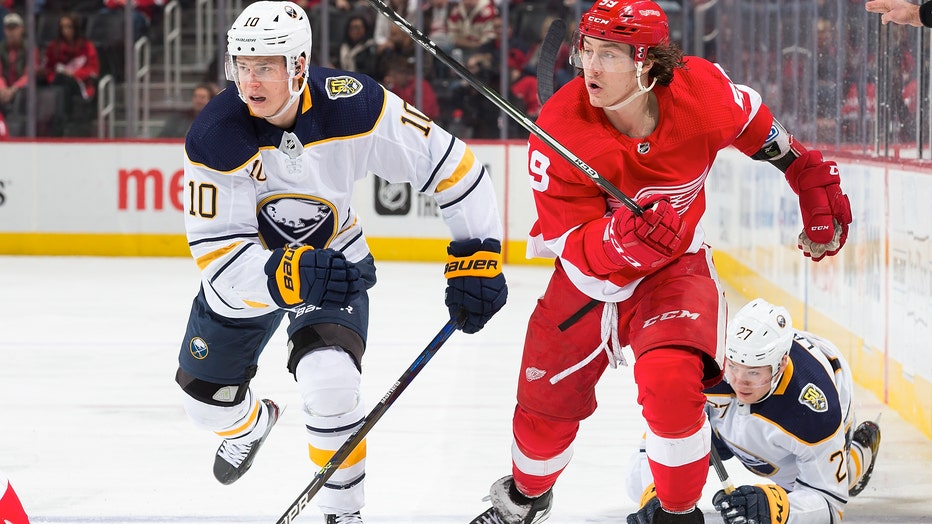 DETROIT, MI - JANUARY 12: Henri Jokiharju #10 of the Buffalo Sabres skates up ice along the boards next to Tyler Bertuzzi #59 of the Detroit Red Wings during an NHL game at Little Caesars Arena on January 12, 2020 in Detroit, Michigan. (Photo by Dave

“It was going to go in eventually, and it was obviously nice to see them go in," Rodrigues said. "Hopefully that continues.”

Zemgus Girgensons also scored in the first period for the Sabres, and Bogosian and Rasmus Ristolainen completed the scoring for Buffalo in the third. Linus Ullmark made 21 saves.

Madison Bowey had the only goal for Detroit. Jimmy Howard had 22 stops.

The Red Wings (12-31-3) have by far the worst record in the NHL. They actually came in with a modest two-game winning streak, but Detroit couldn't overcome its poor start in this one.

“I thought in certain areas, we took steps forward in terms of the way we want to play - the way that we have to play to be successful,” Red Wings coach Jeff Blashill said. “The puck went in the net, and you look up and it's 5-1.”

The Sabres were coming off a 6-3 loss to Vancouver on Saturday.

“We had a pretty serious morning today, and I think that everybody understood the messages that were flowing around and what we needed to do here,” Buffalo coach Ralph Krueger said. “We really came out and played with our character, with our personality. That was an excellent start to the game.”

Buffalo scored at even strength, on the power play and while short-handed in the first. Rodrigues opened the scoring from the slot at 2:39. He added another goal on the power play when he jammed at the puck from the left doorstep and it popped past Howard's stick and in.

Girgensons scored short-handed after Detroit's Robby Fabbri went sprawling to the ice trying to keep an errant pass inside the blue line. Girgensons skated to the loose puck and went the other way on a breakaway.

“You never ever ever leave your feet as the top guy there," Blashill said. "Unfortunately he did, and it's a breakaway.”

Bowey beat Ullmark with a wrist shot from the top of the right circle in the second period.

Bogosian restored Buffalo's three-goal advantage when he scored his first goal of the season with 17:25 left in the third.

“It was an important release of the pressure that we were feeling. I think even holding the 3-1 lead and maintaining it would have been fine, but it definitely seemed to take the wind out of their sails," Krueger said. "I was feeling comfortable with our game again, and the goal, more than anything, I think just took Detroit completely out of the game.”

Blashill said Howard wasn't expecting to play, but Jonathan Bernier was injured at the end of the previous game and was worse after waking up Sunday. He's supposed to have tests Monday.

NOTES: The Sabres now have wins in five straight visits to Detroit. It's the second time in franchise history they've done that. They also had a five-game streak from Oct. 25, 1979 to Dec. 12, 1981. ... Howard fell to 2-15-1 on the season. ... The Red Wings recalled G Calvin Pickard from Grand Rapids of the AHL under emergency conditions.