DETROIT - Eduardo Rodriguez struck out 10 in five shutout innings and the Boston Red Sox snapped a five-game losing streak with a 4-1 win over the Detroit Tigers on Wednesday night.

Boston pitchers struck out 18 batters, with Matt Barnes getting two as he pitched a perfect ninth for his 24th save in 28 chances. 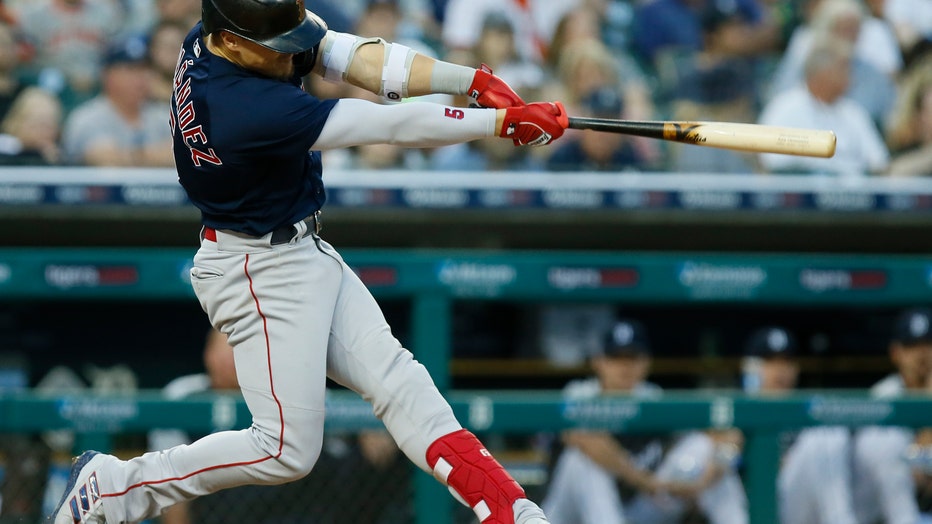 DETROIT, MI - AUGUST 4: Enrique Hernandez #5 of the Boston Red Sox hits a two-run home run against the Detroit Tigers during the fifth inning at Comerica Park on August 4, 2021, in Detroit, Michigan. (Photo by Duane Burleson/Getty Images)

Casey Mize (6-6) gave up four runs on seven hits and a walk in five innings. He struck out three and allowed all three Boston homers.

Both teams had runners on first and third with one out in the first, but Mize and Rodriguez escaped without allowing a run.

Martinez homered to lead off the second, and the game stayed 1-0 until the fifth inning. With two out, Hernandez hit a 3-2 pitch over the Red Sox bullpen for a two-run homer. Two pitches later, Duran made it 4-0 with his second career home run.

Robbie Grossman dropped Alex Verdugo's drive to right-center in the sixth — the play was ruled a double — giving the Red Sox runners on second and third with one out. Derek Holland struck out Hunter Renfroe and pinch-hitter Bobby Dalbec to end the inning.

Jonathan Schoop made it 4-1 with a solo homer off Josh Taylor in the seventh. Grossman walked, and Red Sox manager Alex Cora brought Adam Ottavino in to retire Miguel Cabrera on a soft pop fly.

The Red Sox activated Barnes from the COVID-19 injured list one day after placing him on the list. Barnes showed virus-like symptoms on Tuesday and was put into quarantine at the team hotel, but multiple COVID-19 tests came back negative.

To make room for him, the Red Sox optioned INF Jonathan Araúz to Triple-A Worcester.

Cabrera singled in the sixth inning, giving him 2,945 career hits. He needs 55 hits and two home runs in Detroit's final 52 games to become the first major league player to reach 500 homers and 3,000 hits in the same season.

The teams finish their three-game series on Thursday afternoon, with Detroit's Tarik Skubal (6-10, 4.53) scheduled to start against Martin Perez (7-7, 4.56).