DETROIT - Austin Romine tried to put his tussle with Miguel Cabrera in the past.

Romine and the Tigers finalized a $4.15 million, one-year deal on Friday that gives the 31-year-old catcher a chance for a bigger role. It also puts him in the same clubhouse as Cabrera after the two were involved in a brawl in 2017. During a game between Detroit and the New York Yankees, Cabrera shoved Romine, and the two wrestled each other to the ground.

“No hard feelings,” Romine said on a conference call. “You move on.”

Romine made his big league debut with the Yankees in 2011, and that has been the only big league team he's played for. He batted a career-best .281 with eight home runs and a .748 OPS in 72 games last season. 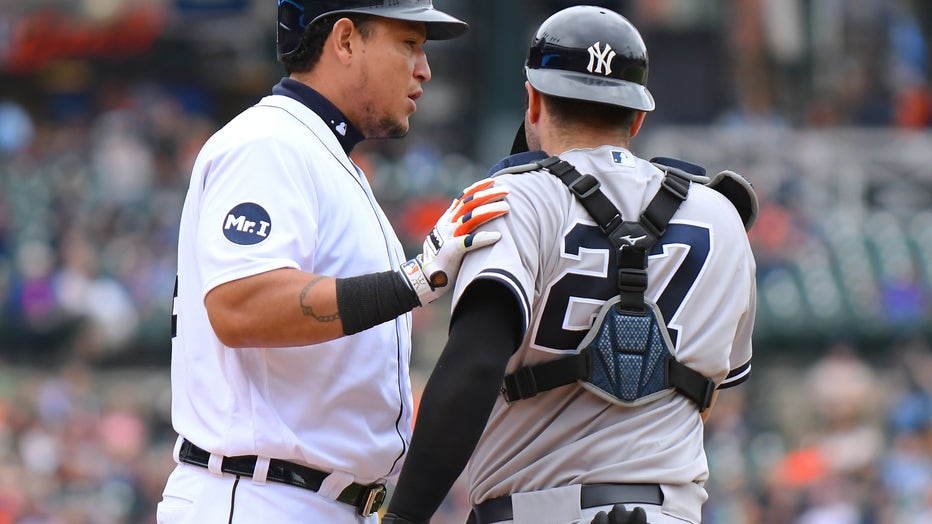 DETROIT, MI - AUGUST 24: Miguel Cabrera #24 of the Detroit Tigers talks with catcher Austin Romine #27 of the New York Yankees after Yankees pitcher Tommy Kahnle #48 (not shown) was ejected for throwing a pitch behind Cabrera in the sixth inning of t

Romine was a backup to Gary Sánchez with the Yankees. He's never played more than 80 games in a season, and the Tigers are a good fit for a catcher looking for more at-bats.

Catcher Grayson Greiner hit just .202 for Detroit this year. Jake Rogers, acquired by the Tigers in the 2017 trade that sent Justin Verlander to Houston, made his major league debut last season but hit just .125 in 35 games.

So if Romine performs as he did in 2019, this could be a good spot for him.

“The opportunity definitely stood out for me,” he said. “If you do well, you can play a little bit more.”

The move still means Romine is leaving a first-place team - and the organization that drafted him back in 2007.

“That was tough,” he said. “I wanted to make sure I made the best decision for my family and me moving forward.”

Romine is the younger brother of Andrew Romine, who was a utility player for Detroit from 2014-17. So he had at least one good source he could talk to about the Tigers and the city. But he said Andrew Romine has more pressing matters in his life than his brother's free agency.

“I've been trying to leave him be,” Austin Romine said. “He just had a little baby girl.”