Detroit slugger Miguel Cabrera went 0 for 3 with a walk to remain at 499 career home runs.

Ryu (12-6) allowed five hits, walked one and struck out five to snap a two-start winless stretch. The left-hander didn’t allow a runner past first base until Harold Castro hit a one-out double in the fifth. 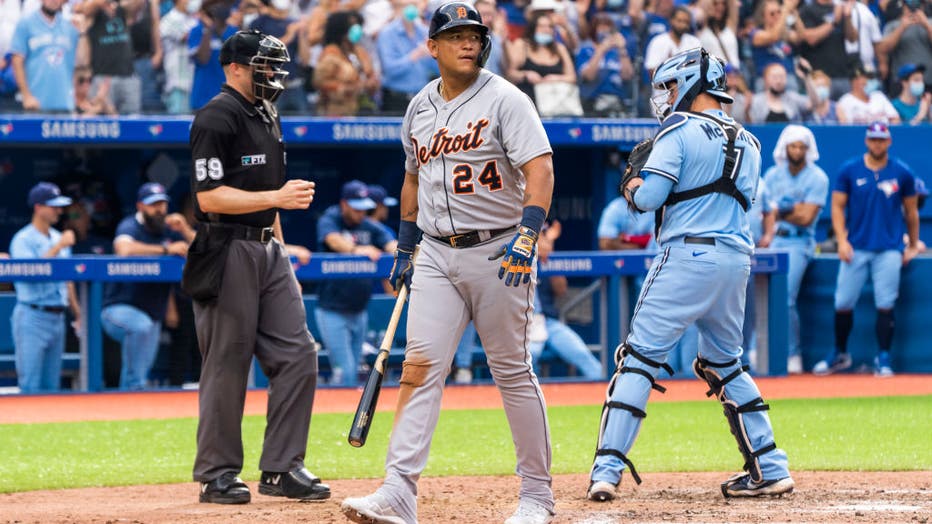 TORONTO, ON - AUGUST 21: Miguel Cabrera #24 of the Detroit Tigers strikes out to end the game against the Toronto Blue Jays in the ninth inning at the Rogers Centre on August 21, 2021 in Toronto, Ontario. (Photo by Mark Blinch/Getty Images)

"Ryu was our ace today," Blue Jays manager Charlie Montoyo said. "His changeup was nasty today and you could see that early on."

"It felt like we turned it around today," Ryu said through a translator, referring to the change in result after Toronto lost 4-1 in 10 innings Friday.

Semien credited Ryu’s pitch mix for keeping the Tigers off the scoreboard.

"They couldn’t really key in on anything," Semien said. "He’s got so many weapons."

Ryu was struck on the lower left leg by Jeimer Candelario’s comebacker in the seventh but waved off the trainer and finished the inning.

Tim Mayza pitched a perfect eighth and Jordan Romano wrapped it up for his 11th save in 12 chances as the Blue Jays completed their 12th shutout.

Cabrera struck out swinging for the final out as the Tigers lost for the fifth time in six games.

Cabrera grounded out in the second, then hit into an inning-ending double play in the fourth. He walked to begin the seventh but was erased on a fielder’s choice.

Toronto snapped a three-game losing streak and won for the second time in its past eight.

Santiago Espinal hit a two-out single off Tigers right-hander Wily Peralta (3-3) in the second and Grichuk followed with a first-pitch drive to left, his 21st.

"You’re never out of the inning, especially against this team," Tigers manager A.J. Hinch said of Toronto. "They’ve got power throughout the lineup."

"He did a great job of controlling contact," Hinch said.

Semien made it 3-0 with a second deck shot off Erasmo Ramirez in the eighth, his 30th.

Tigers outfielder Derek Hill was actived off the injured list before the game, returning to the lineup for the first time since an Aug. 10 outfield collision with Akil Baddoo. Hill led off and started in center. He went 2 for 4 with two singles.

"He picked up right where he left off," Hinch said.

The Blue Jays lead the majors with seven shutouts since the All Star Break. Milwaukee is second with six.