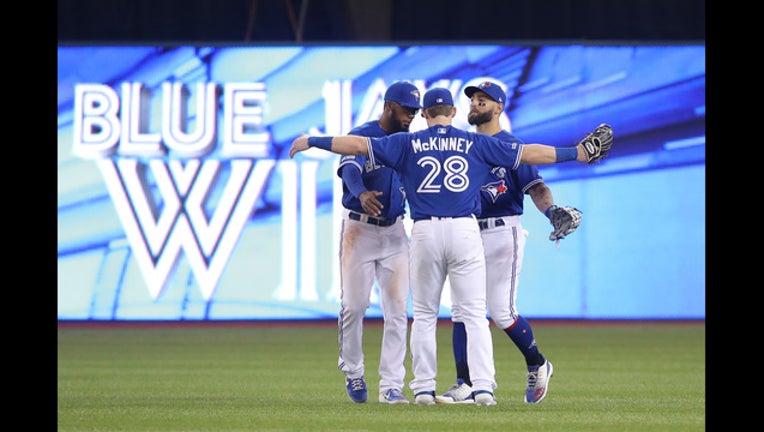 TORONTO, ON - MARCH 30: Billy McKinney #28 of the Toronto Blue Jays celebrates their victory with Teoscar Hernandez #37 and Kevin Pillar #11 during MLB game action against the Detroit Tigers at Rogers Centre. (Photo by Tom Szczerbowski/Getty Images)

TORONTO (AP) - Three games into the season, Blue Jays starting pitchers have yet to allow a single run.

"I was just trying to match what the other two guys did the two days before me," Sanchez said.

"He was outstanding," Blue Jays manager Charlie Montoyo said. "He was in control the whole time."

Sanchez's outing extended Toronto's record streak of consecutive scoreless innings to begin the season to 19. The previous record was eight, set by Jack Morris in 1992.

The AL ERA champion in 2016, Sanchez struggled with persistent blister issues in 2017, then suffered a bizarre injury last June when the middle finger on his pitching hand got caught inside a suitcase.

"It's great to have him healthy," Toronto slugger Justin Smoak said.

The Blue Jays threw just three shutouts all of last season, the second fewest in the majors. Detroit was last with two.

The Tigers were blanked an MLB-leading 18 times in 2018. They've scored in only one of 28 innings so far this season.

"Kind of a scuffle offensively," manager Ron Gardenhire said. "I have confidence in these guys. We've got some really good hitters in this lineup. These things happen."

Detroit's two runs through the first three games of the season are their fewest since 2003, when they also had two. The Tigers lost 119 games that season, a franchise-worst.

Tigers first baseman Miguel Cabrera left after being hit on the right hand by a pitch from Sanchez to begin the sixth. X-rays were negative.

"We'll see how he is tomorrow" Gardenhire said.

Cabrera had been scheduled to start as the designated hitter in the series finale. The slugger flashed a thumbs-up when asked afterward how his hand was feeling.

Smoak hit a two-run homer and that was plenty for the Blue Jays. Toronto limited Detroit to five hits.

Hudson pitched one inning, Joe Biagini went 1 1/3 innings and Ken Giles finished for his first save.

Detroit right-hander Spencer Turnbull was perfect through three innings before Brandon Drury doubled to lead off the fourth. Billy McKinney followed with an RBI single but was thrown out trying to advance to second. Teoscar Hernandez walked before Smoak lined a homer into Toronto's left field bullpen, his first.

"I made most of my pitches," Turnbull said. "There were several in the fourth I wish I could take back."

Cabrera's single in the first was his first of the season and the 2,677th of his career, tying Hall of Famer Luis Aparicio for second most by a Venezuelan-born player. Only Omar Vizquel (2,877) has more.

Buckets were placed below a leak that was dripping onto the warning track in right center field before the game, and blowers were used to dry the turf before first pitch. At least two other leaks were dripping into the seating areas. Last April, the Blue Jays had to postpone a game against Kansas City after chunks of ice falling off the nearby CN Tower punctured holes in the stadium roof. A large-scale roof repair is ongoing, and is expected to last until June.

Blue Jays: INF Richard Urena made his first start of the season as 2B Lourdes Gurriel Jr. got the day off.

Blue Jays: RHP Trent Thornton will make his major league debut. He starts in place of LHP Ryan Borucki (elbow), who is on the 10-day injured list.