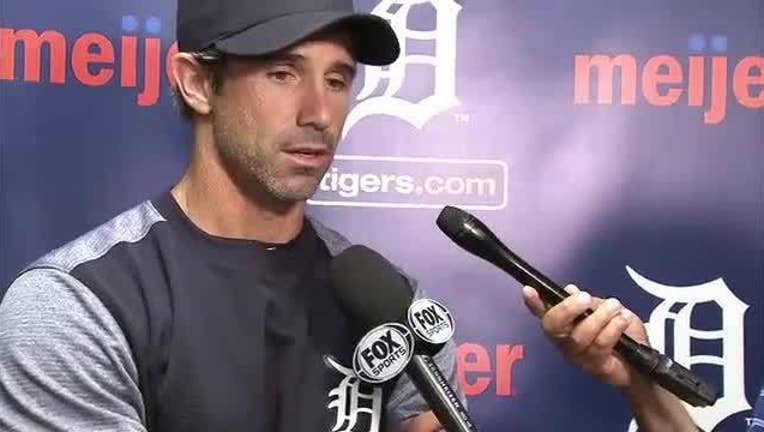 SEATTLE (AP) - Kyle Seager couldn't let his brother get all the attention in the family on Tuesday night, even if he had to acknowledge the younger Seager probably had the better game.

"That's a tough day to match," Seager said of his brother Corey's three home runs for the Los Angeles Dodgers. "I think I'm going to give him the edge today."

Seager had his own noteworthy moment with a game-winning RBI double to score Tyler Smith and give the Seattle Mariners a 5-4 win over the Detroit Tigers in 10 innings. Seager's one-hop shot off the right-field wall didn't quite match the three homers by his brother. But the hit gave Seattle it's fourth walk-off win this season and came after the Mariners missed chances with runners in scoring position in the eighth and ninth.

"I've been feeling pretty good. Sometimes you're feeling good and don't get many hits," Seager said. "Certainly doubles are good. I like those."

The rally in the 10th didn't take much. Nelson Cruz walked on a 3-2 pitch from Justin Wilson (3-3) to open the inning. Smith came on as a pinch runner and reached second with no outs on a wild pitch. Seager then turned on a fastball and lined it over the head of right fielder J.D. Martinez, allowing Smith to score easily.

"He got in a good count against a really good left-handed pitcher. That was the pitch he needed to get on and he didn't miss it," Seattle manager Scott Servais said.

It was a game dominated by home runs, including Ian Kinsler's 44th career leadoff homer on the third pitch of the game. Kinsler is tied with Brady Anderson for fifth all-time in leadoff homers. Justin Upton and J.D. Martinez also went deep for the Tigers, while Taylor Motter and Ben Gamel each had solo shots for Seattle. Cruz also had a two-run double.

Seattle held a 4-2 lead going to the eighth when one of those homers pulled Detroit even against reliever Dan Altavilla. With two outs, Kinsler scored from second base on a pitch in the dirt that bounced away from catcher Mike Zunino. Kinsler was stealing on the play and never stopped after rounding third. Martinez followed with his 12th home run to tie it 4-all.

It was just the fifth time in 24 games this season Detroit has lost when hitting at least two home runs.

Ariel Miranda threw seven strong innings and was in line for his seventh win until Altavilla faltered in the eighth. Miranda allowed just four hits and none after Martinez's two-out single in the third, retiring 13 of the final 14 batters he faced.

The streak was snapped only by Seager's fielding error at third base with one out in the seventh. Miranda finished seven innings for the fourth time in 15 starts and rebounded after getting knocked around for 10 hits and six earned runs in his previous outing against Minnesota.

"Basically the whole game I had to battle," Zimmermann said. "It seemed like the first guy got on every inning and I had to work out of a lot of trouble. Getting toward the end I was pretty gassed. ... I didn't have my best stuff tonight. I was happy to go 6 2/3."

Gamel had the best at-bat of the night in the seventh against reliever Daniel Strumpf. Gamel fell behind 0-2, fouled off four straight pitches at 2-2 and on the ninth pitch lined his third homer of the season.

"He fouled off a bunch of pitches. He ended up the home run, which obviously I don't like, but sometimes you got to give the hitter credit," Detroit manager Brad Ausmus said.

Servais said Hisashi Iwakuma will need at least one more rehab start before rejoining the rotation. Iwakuma lasted just two innings Monday night at Triple-A Tacoma. He was originally scheduled to return Saturday against Houston, but that start will now likely go to Christian Bergman or Sam Gaviglio. Servais hopes shortstop Jean Segura will be able to return from a high ankle sprain by this weekend, possibly as early as Thursday.

Tigers: RHP Justin Verlander (4-4) will be looking for his first decision in four starts. He allowed two runs over seven innings in his last start against Tampa Bay.

Mariners: James Paxton (5-2) tries to snap a two-game skid. Paxton was battered for seven runs over 3 2/3 innings in his last start against Texas.