SAN JOSE, Calif. - The surging San Jose Sharks weren’t at their best. Still, they did enough to keep their winning streak going.

Kevin Labanc had a goal, two assists and the shootout winner as the beat the Detroit Red Wings 4-3 Saturday night for their sixth straight win.

Andreas Athanasiou scored twice and Taro Hirose added one for Detroit, which has lost 12 of 16. 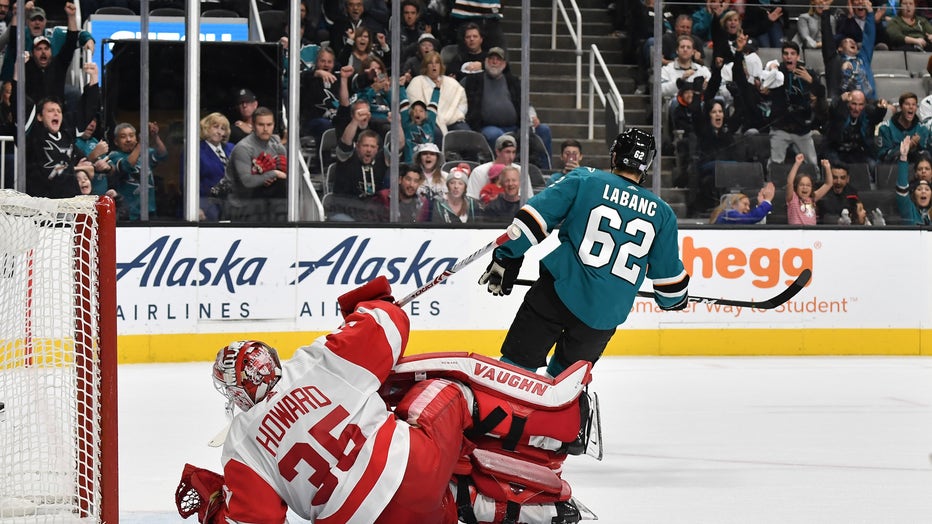 “We’re obviously in a better spot now than we were six games ago, and we still have a long way to go,” said Karlsson, who played in his 700th NHL game. “I think we’re finding ways to win games now. I don’t think we played well in Anaheim or tonight in long stretches, but we’re finding a way.”

Martin Jones had 25 saves and stopped all three Red Wings attempts in the shootout. Among his saves was a sensational one that robbed Brendan Perlini of a power-play goal midway through the second with San Jose up 2-1.

“He made massive saves,” Couture said of Jones. “That penalty kill, and save in the second was huge … He’s playing great. Big reason we got two points was him tonight.”

Jimmy Howard had 16 saves and stopped 2 of 3 shootout attempts.

Athanasiou tied it at 3 by scoring his fifth of the season with 4:14 left. He took a no-look pass from Valtteri Filppula on a 2-on-1 and fired a 35-footer past Jones.

Labanc snapped a streak of eight games without a goal when he scored his sixth with just under a minute left in the first of a scoreless game. He hadn’t tallied a point in his previous five games.

Vlasic fired a in long shot just over a minute into the second to give the Sharks a 2-0 lead.

The Red Wings answered 13 seconds later on Athanasiou’s fourth goal, and they tied it midway through the second on Hirose’s first goal of the season in his 18th game.

“Overall we played pretty good hockey,” Red Wings coach Jeff Blashill said. “We weren’t perfect, I thought we played fast a lot of the times, I thought our gaps were better, I thought our O-zone offense was better. We leaked a little oil at the end of the hockey game and I thought we were good in overtime.”