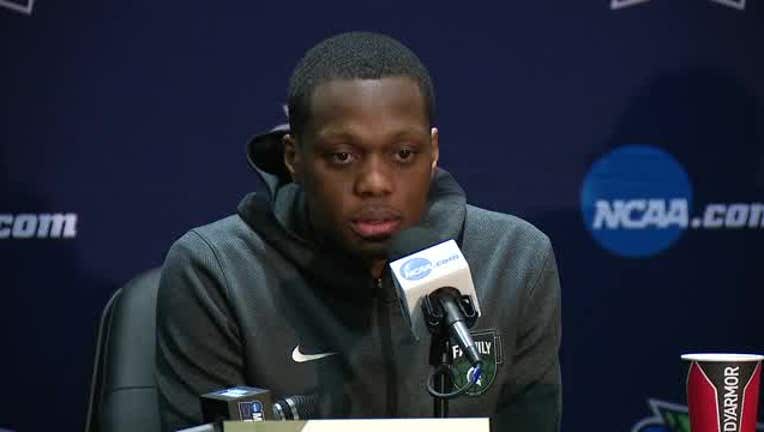 The nation's top teams don't have to wait long to find out how they measure up against some of the best competition.

Answers will come quickly for No. 1 Michigan State, No. 2 Kentucky, No. 3 Kansas and No. 4 Duke in the Champions Classic, the marquee event in college basketball's opening week.

The Jayhawks and Blue Devils meet Tuesday night in New York's Madison Square Garden, followed by the Spartans and Wildcats in the 42nd meeting of the Top 25 poll's top teams.

Still, it's nothing more than a starting point for teams that hope to be the last one standing after the Final Four in Atlanta come April.

"It's great because if you think you're better than you are, you usually get it knocked out of you," Michigan State coach Tom Izzo said Monday.

Look no further than last year for an example.

Kentucky was No. 2 but fell to Duke in the Wildcats' most lopsided loss under Calipari. Kansas beat Michigan State in the other game. Yet the Wildcats went as deep into the NCAA Tournament (regional final) as the Blue Devils, the Jayhawks fell in the opening weekend and the Spartans reached the Final Four by taking down Duke.

Now the Spartans are No. 1 in the preseason for the first time in program history behind preseason Associated Press All-American Cassius Winston.

Like Calipari, Kansas coach Bill Self said he would typically prefer to play a game or two before playing in this event.

"I like playing the game," Self said. "I don't think it's the best situation to play this game because you don't have a chance to scout or get a chance to play to strengths and weaknesses, or try to get matchups and things like that because you really don't know yet what they do well and don't do well."

The game certainly has the attention of the NBA. Champions Classic media coordinator Charley Green estimated 60-70 NBA personnel will attend to watch the nation's top four teams under one roof.

"That's how it should be," Duke sophomore point guard Tre Jones said. "That's what the fans want."

Some other things to know heading into the opening week of college basketball:

While Duke faces Kansas, the rest of the Atlantic Coast Conference is opening in unusual fashion: with a league game.

Fourteen teams open the ACC's first 20-game schedule with a league matchup, ready-made programming for the first season with the ACC Network TV channel. Previously, two ACC teams last met in a season-opening conference matchup in December 1967, according to the league.

Reigning national champion and 11th-ranked Virginia visits Syracuse on Wednesday. This will mark the first time a national champion opened on the road since Kansas played in the now-defunct Great Alaska Shootout against host Alaska-Anchorage in November 1988, according to Sportradar.

The nation's No. 1-ranked recruiting class debuts this week for No. 14 Memphis.

Penny Hardaway's Tigers host South Carolina State on Tuesday in the program's first game as an AP Top 25 team since March 2014. It will be the first look at 7-foot-1 preseason AP All-American James Wiseman, assuming he's recovered from an ankle injury that sidelined him for Memphis' exhibition wins.

No. 16 Baylor and No. 20 St. Mary's open in unusual neutral-site locations.

The Gaels meet Wisconsin in Sioux Falls, South Dakota, on Tuesday in their first meeting since December 1976.

It's been an even longer gap for the Bears and Washington, who travel to Alaska for Friday's Armed Forces Classic in Anchorage. Those teams haven't met since December 1955.

Washington, last year's Pac-12 regular-season champion, is the top vote-getter among unranked teams and could enter next week's AP Top 25 by beating Baylor.

Colorado, also just outside the poll, plays in the annual Pac-12 China Game against fellow league member Arizona State in Shanghai on Friday night in U.S. time. The Pac-12 said the game, which won't count in the league standings, is the only regular-season contest by any U.S. professional or collegiate league held in China.