Piscataway - Juwan Howard refers to Zavier Simpson as the Tom Brady of Michigan basketball, with the point guard leading and directing the Wolverines.

Simpson did just that, scoring 16 points with five assists and two steals, while Franz Wagner added 12 points as the Wolverines handed Rutgers its first loss home loss of the season, 60-52. 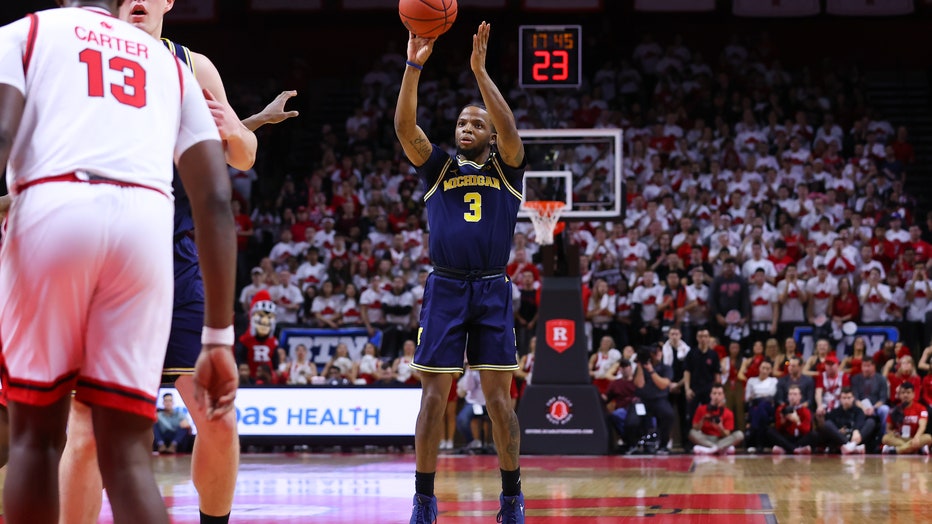 PISCATAWAY, NJ - FEBRUARY 19: Michigan Wolverines guard Zavier Simpson (3) shoots during the first half of the college basketball game between the Rutgers Scarlet Knights and the Michigan Wolverines on February 19, 2020 at the Louis Brown Athletic Ce

“They got a lot of weapons, but when they have that quarterback that can slice and dice you, nothing is easy,” Rutgers coach Steve Pikiell said of Simpson, who scored his 1,000th career point in the game.

Rutgers (18-9, 9-7 Big Ten Conference) jumped out to an early lead, but Michigan (17-9, 8-7) settled down and led 16-8 at the 13:03 mark. Rutgers would chip away at the lead until Ron Harper Jr. hit a 3-pointer from the corner to put the Scarlet Knights up 22-21. Jon Teske hit a 3-pointer on the ensuing possession to regain the lead for Michigan at 6:21. The two teams battled for the lead until Geo Baker nailed a 3-point step-back jumper from the right wing, giving Rutgers a 31-28 lead at halftime.

Rutgers would start the second half on a 6-0 run before Michigan clawed back to retake the lead at 42-41 midway through the second half on a David DeJulius jumper. DeJulius, who finished with 10 points off the bench, hit another 3-pointer on Michigan’s next possession to cap a 15-4 run and give the Wolverines a 45-41 advantage. The basket was assisted by Simpson, who’s been playing some of his best basketball of the season as of late.

Michigan upped its lead to as many as nine points and stayed in front from there. Rutgers was 17-0 at home this season entering the game.

“It’s loud, I’ll say that. You have an energetic crowd … it’s a small environment. It’s one of the smaller arenas in the Big Ten and everyone talks about this historic place. I’m just glad I got to witness it.”

Baker had 16 points to lead Rutgers. Harper pitched in with 13 points, while Akwasi Yeboah scored 10.

Michigan's Isiah Livers injured his right ankle against Indiana in the Wolverines' previous game. While he returned to play in that game, he sat out in a walking boot against Rutgers. Howard said he was “day to day.”

Michigan: The Wolverines have had an up-and-down season. They've been ranked as high as No. 4 in the Top 25 poll early in the season, and have now won six of their last seven, after enduring a four-game losing streak.

Rutgers: As good as the Scarlet Knights have been at home, it’s been a struggle on the road. Sitting at 1-6 away from the cozy confines of the RAC, Rutgers has a couple of road opportunities coming up at Wisconsin and No. 9 Penn State. Either win improve their NCAA Tournament resume and give Rugers its first appearance in the tournament since 1991.

Michigan: The Wolverines are at Purdue on Saturday.

Rutgers: The Scarlet Knights are at Wisconsin on Sunday.