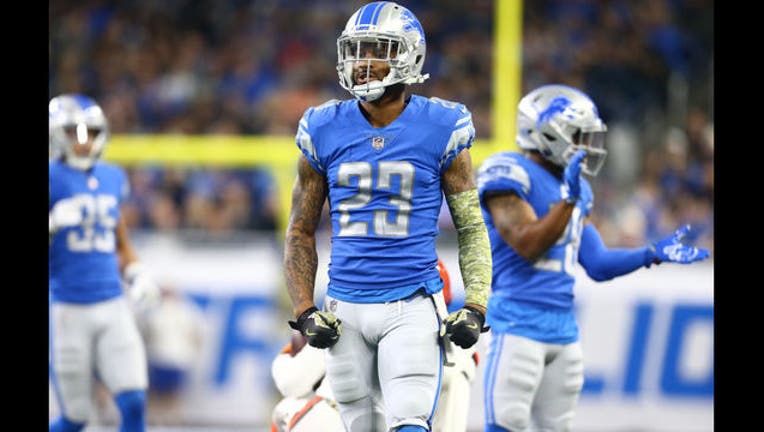 DETROIT, MI - NOVEMBER 12: Darius Slay #23 of the Detroit Lions celebrates his tackle during the game against the Cleveland Browns at Ford Field on November 12, 2017 in Detroit, Michigan. (Photo by Rey Del Rio/Getty Images)

NEW YORK (AP) - Antonio Brown was one of four repeaters from last season on The Associated Press 2017 NFL All-Pro Team, and the only unanimous choice.

The brilliant wide receiver of the Pittsburgh Steelers drew all 50 ballots Friday from a nationwide panel of media members who regularly cover the league. Brown missed the last two-plus games with an ankle injury.

The repeaters from 2016 were Rams interior defensive lineman Aaron Donald, who got 49 votes, and punter Johnny Hekker; and Seattle linebacker Bobby Wagner.

"Dang, that's crazy. It means a lot, honestly," said Gurley, who likely would have led the league in rushing had he played in LA's finale. "It's a blessing. I've got so much respect for everybody in this league, and to be in this position just means so much to me.

"I've been following people around the NFL my whole life, and to be considered as an All-Pro, man, God is good, honestly. Honestly."

Three Steelers joined Brown on the roster: Le'Veon Bell as the flex, interior defensive lineman Cam Heyward, and right guard David DeCastro. No other team had more than two All-Pros, with the stronger NFC getting 18 players and the AFC 10.

First-timers made an impression on both sides of the ball, with 15 on the team: Byard, Slay, Rhodes, Jones, Jordan, Ramsey, Campbell, Hopkins, Norwell, Kelce, Johnson, Agnew, Baker, Gurley, and Cooper.

Wagner is on his third All-Pro squad.

"When you get voted for these types of awards," he said, "it shows you all the work you do in the offseason, the grinding, all the things you push through ... when you get this, when people say this is not AFC, NFC, this is the league, this is who we deem the best at their position in the league, that says a lot. And you see the guys before you, the things they were able to accomplish, you've seen those things and you want those things. It's part of that mindset of wanting to be great and understanding what comes along with that, and wanting that kind of acknowledgment."

While making All-Pro has become almost natural for Wagner, Jordan finally got there in his seventh pro season.

"I'm definitely trying to push myself to be better than I was the year previous," he said. "I think I had a really good year last year. Of course, sack numbers won't show that, but in terms of playing the run, in terms of getting after the passer I thought last year was one of my better years (7 1-2 sacks, 17 tackles for loss). So what I wanted to do this year is, of course, push myself to be better than last. That probably only poses the problem of where I go next year. Now I've got to shoot for more than what I did this year."

Results of The Associated Press 2017 NFL All-Pro balloting selected by a national panel of 50 media members: