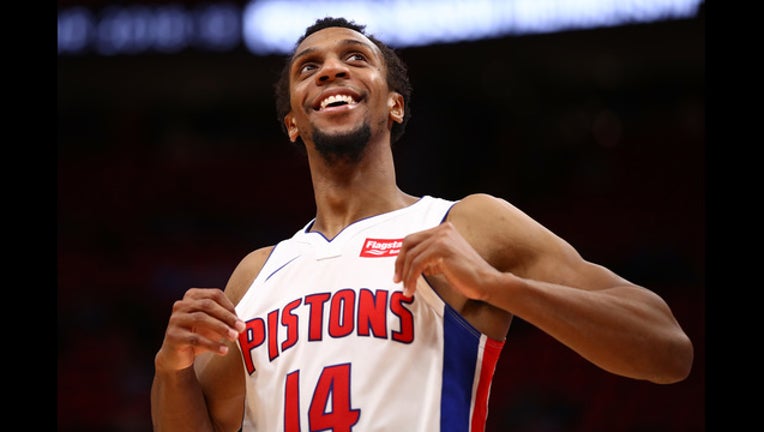 Not after the Pistons made it much harder than necessary.

Detroit led by 30 points midway through the third quarter, but was outscored 59-35 in the final 17 minutes as Atlanta got as close as four before the Pistons held on for a 104-98 victory on Wednesday night in their final game before the All-Star break.

"We gave our bench a 30-point lead, and they didn't even try at either end of the floor," he said. "We should have been able to shut down our starters, but we had to bring them back, and they didn't bring anything either.

"We left 15 minutes early for the break, but I'll take the win and move on."

Blake Griffin narrowly missed his first triple-double with the Pistons, finishing with 13 points, 12 rebounds and nine assists, but agreed with his coach that the end of the game wasn't acceptable.

"We moved the ball and we played great defense to build the lead to 30," he said. "But there's no excuse for the way we played defense for the rest of the game. We were still OK on offense, but we missed a lot of open shots."

"He probably should have had 14 or 15 assists, but we kept missing wide-open looks and layups," Van Gundy said. "He was doing a great job of passing."

Andrew White III had 15 points for the Hawks in his NBA debut, while John Collins had 11 points and 10 rebounds.

"I've only had two shootarounds with the team, so I've been trying to memorize the video playbook they gave me," White said. "I've worked as hard as I've ever worked over the last three days, just to get ready for the minute or two I thought I might play."

"It is pretty obvious that this was a night that didn't look like it was going to go well for us as a group," Hawks coach Mike Budenholzer said. "It looked like they were going to pull away on us, but it is a credit to the character of these guys that they fought back and made it a game."

Detroit led by 12 points at the half, then started the third quarter with its second 17-2 run of the game. That put the Pistons ahead by 25, and the margin was 30 before the Hawks finally broke 40 points with 5:20 left in the third.

Detroit still led 82-61 at quarter's end, but Van Gundy called a timeout after the Hawks cut the margin to 89-74 with 6:58 to play. Atlanta got the lead to single figures, 94-86, with 2:58 left, forcing another timeout. The Pistons fouled two 3-point shots in the final minute along with allowing a three-point play, much to Van Gundy's disgust.

That made it 100-96 with 10 seconds to play, but Smith hit two free throws to clinch the game.

"That was an embarrassing fourth quarter," Van Gundy said. "We played well for about 35 minutes, but we didn't bring anything after that."

The undermanned Hawks got off to a quick lead, but Detroit finished the first quarter on a 17-2 run to lead 22-14. The offenses continued to struggle in the second, with the Pistons outscoring Atlanta 23-19 to take a 45-33 lead at the half.

"I thought we were playing decent basketball, but we just couldn't get a shot to go in the basket in the first half," Budenholzer said.

Detroit shot 38 percent in the half, led by 12 points from Smith, and held Atlanta to 33.3 percent. Dewayne Dedmon led the Hawks with eight points and seven rebounds in the half, but didn't have a basket or a rebound in 11 second-half minutes.

Hawks: Atlanta missed 20 of its first 22 3-pointers. . Taurean Prince has started all 59 of Atlanta's games, but the other four starters - Dedmon, John Collins, Tyler Dorsey and Malcolm Delaney - had 29 starts combined before Wednesday.

Pistons: Detroit is now 5-3 with Griffin in the lineup. . Drummond led the Pistons in rebounds for the 19th straight game.

Griffin felt it was his best offensive performance since joining the Pistons, despite going 4 for 10 from the floor and missing his only three shots from inside the 3-point line.

"We had a good flow going, and that was a big reason we jumped out to that big lead," he said. "It is definitely getting easier to recognize what we're doing in the offensive sets."

Hawks: Host the Indiana Pacers on Feb. 23 after an eight-day All-Star break.

Pistons: Host the Boston Celtics on Feb. 23 after an eight-day All-Star break.