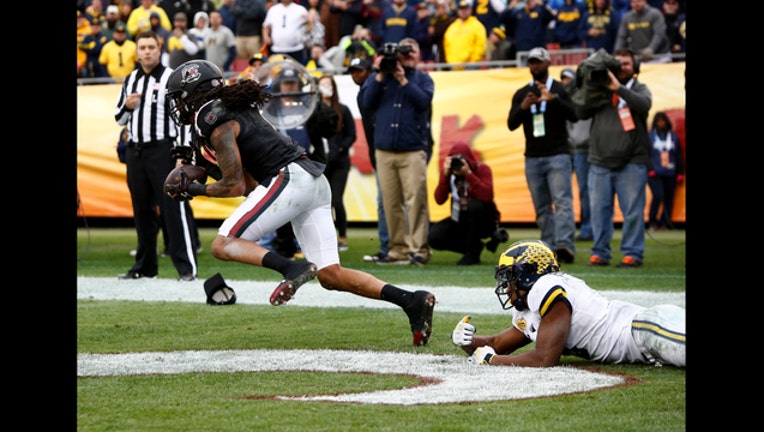 TAMPA, FL - JANUARY 1: Defensive back JaMarcus King #7 of the Gamecocks intercepts a pass in the end zone intended for Donovan Peoples-Jones #9 of the Wolverines during the fourth quarter. (Photo by Brian Blanco/Getty Images)

"We don't have all the trophies and the tradition and history but we have some grit," the coach said after the Gamecocks rallied from a 16-point second-half deficit. to beat Michigan 26-19 in Monday's Outback Bowl.

"We've got some toughness and resolve. You saw us down 19-3 and not a lot of good things happening for us," Muschamp added. "All the arrows are pointing up for us. We're going to have those trophies."

Jake Bentley threw for 239 yards and two touchdowns Monday to pace the win, which gave the Gamecocks (9-4) at least nine wins in a season for just the seventh time.

Bentley shrugged off a slow start to toss scoring passes of 21 yards to Bryan Edwards and 53 yards to Shi Smith, the latter giving his team a 23-19 lead early in the fourth quarter.

The sophomore said once the Gamecocks began to have some success, the offense's confidence grew.

"It's just we started to execute well. The excitement, I think, is contagious to the whole team," Bentley, voted the game's most valuable player, said. "You see where we went from there."

Michigan (8-5) finished with its first three-game losing streak under coach Jim Harbaugh. The Wolverines turned the ball over five times after halftime, including an end zone interception that denied them an opportunity to regain the lead with just under eight minutes to go.

The loss also cost the Big Ten a clean sweep of bowl games involving conference members. The league entered 7-0, looking to go unbeaten in postseason play for the first time since 1998 when it went 5-0.

"We kind of let them hang around and they took advantage of it.," Harbaugh said. "They got better as the game went on. We didn't get the knockout punch when we needed it."

Bentley was 19 of 32 passing with one interception. Rico Dowdle, playing for first time since breaking his leg against Tennessee on Oct. 14, began South Carolina's comeback from a 19-3 deficit with a 17-yard TD run.

Brandon Peters had a tough day for Michigan, completing 20 of 44 passes for 186 yards and two interceptions. His second pick, with 1:05 remaining, sealed South Carolina's second Outback Bowl victory over the Wolverines in five years.

"There's some really good, and there's a few I know he'd like to have back," Jarbaugh said. "But he was battling just like the rest of the guys. There was some error there, a little too much at the wrong time."

Quinn Nordin accounted for most of Michigan's scoring, kicking field goals of 35, 26, 45 and 48 yards. Fullback Ben Mason scored on a 1-yard run in helping Michigan build its 16-point lead.

Peters, who returned to the lineup after missing the regular-season finale against Ohio State with a concussion, was hoping to make it more difficult for Harbaugh to replace him next season - even if Shea Patterson is one of coach's options.

Patterson plans to transfer to Michigan from Mississippi, a program hit with sanctions, and to petition the NCAA to allow him to be immediately eligible.

South Carolina: South Carolina feels good about its progress in two seasons under coach Muschamp, whose 15 victories match the most by any coach in his first two years with the Gamecocks. Joe Morrison (1983-84) and Steve Spurrier (2005-06) also won 15.

"This whole month we've talked about going on out top and leaving the right legacy for this class," linebacker Skai Moore, one of 12 seniors on South Carolina's 109-player roster, said. "It means a lot to this senior group."

Michigan: Wolverines could open the 2018 season against Notre Dame with a new quarterback. But there likely will not be nearly as many changes as this season when Michigan returned the fewest starters (six) of any FBS program in the country. In addition to Peters and Patterson, the competition for the QB job will include Dylan McCaffrey, son of former NFL player Ed McCaffrey and brother of Carolina Panthers running back Christian McCaffrey.