PISCATAWAY, N.J. - Cody White and a shutdown defense combined to end a five-game losing streak and to put Michigan State a win away from being bowl eligible for the 12th time 13 years.

White had career-highs with 11 receptions and three touchdowns and the Spartans breathed life back into their season with a 27-0 win over Rutgers on Saturday.

"You put so much into these things you want them to go well," Spartan coach Mark Dantonio said of the season. "Sometimes they don't go so well, but that's football across this country. But it's what are you going to do next. That was the message this week."

Michigan State (5-6, 3-5) ignored the recent adversity and injuries and dominated from start to finish in sending the Scarlet Knights (2-9, 0-8) to their 20th straight conference loss. 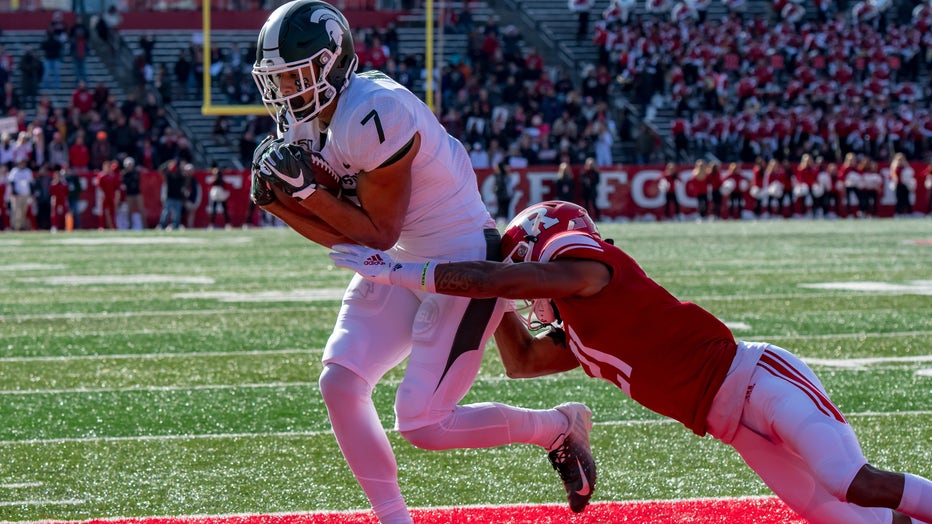 White, who entered with two touchdown catches this season, caught scoring passes of 21, 16 and 7 yards from Brian Lewerke.

"The first play of the game I caught an out route and went up and got it," White said. "So right off the bat my confidence was high. I just have to keep grinding and keep pushing into next week."

Rutgers thought it had scored midway through the fourth quarter on a 44-yard field goal by Justin Davidovicz. But a holding penalty took the points off the board and forced a punt.

Michigan State can qualify for the bowl game with a win at home over Maryland next weekend.

White has been a pain for Rutgers. He scored the game-winning touchdown on an end around late in the fourth quarter in a 14-10 win last season. The junior's 11 catches tied for the eighth most in a single game for the Spartans and his 136 yards receiving was a season high for him.

Michigan State outgained Rutgers 395-140 in total yards and held the Scarlet Knights without a first down in the first half in taking a 17-0 lead. Rutgers finished with seven first downs.

Lewerke and White were the show on offense in the opening half, combining nine times for 117 yards, including touchdown passes of 21 yards in the first quarter and 16 with 32 seconds left in the half.

The margin could have been a lot worse. The Spartans were stopped on fourth and 1 inside the Rutgers 33 twice and Coghlin hit the left goalpost on a 33-yard field goal attempt after safety Xavier Henderson returned an interception to the Rutgers 15.

Rutgers longest play in the half was a 7-yard yard pass to Aaron Young. The Scarlet Knights got their initial first down on a 13-yard run by quarterback Johnny Langan on the second play of the second half.

The game was the final home game for Rutgers and fifth-year senior offensive tackle Zach Venesky walked the scarlet R in the middle of the field, kissed his hand and put it on letter.

The game was called "The Believe Game" as Rutgers honored Eric LeGrand, who was paralyzed in a game against Army in 2010.

LeGrand appeared at halftime and vowed to walk again. He also had a message for the university's board of governor's which will sign off on a new coach soon. LeGrand's former coach, Greg Schiano, is the front-runner.

Rutgers: This was their last real chance to win a game. No chance in Happy Valley next week.