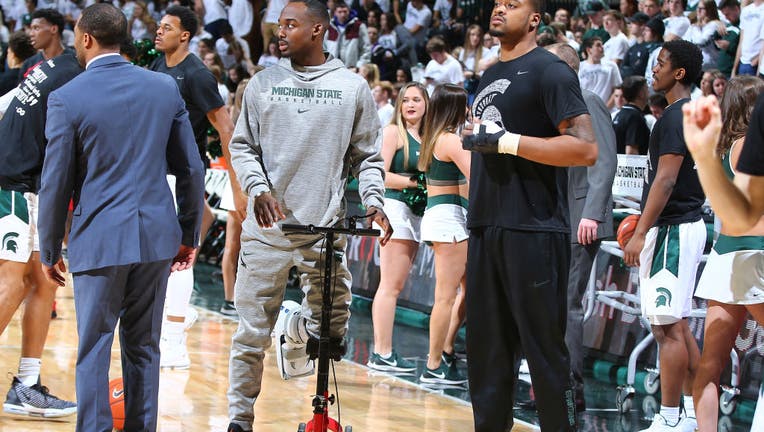 EAST LANSING, MI - FEBRUARY 20: Nick Ward #44 and Joshua Langford #1 of the Michigan State Spartans look on during warm ups prior to the game against Rutgers Scarlet Knights at Breslin Center on February 20, 2019 in East Lansing, Michigan. (Photo by

Guard Joshua Langford had a setback in his return from a foot injury, and coach Tom Izzo says the senior will be re-evaluated in January. Langford played only 13 games last season, averaging 15 points.

An emotional Izzo said Tuesday a problem has surfaced with the same foot. Izzo described the current issue as a stress reaction and said Langford has missed practice time.

"It's one of those weird things that breaks my heart," Izzo said. "I love Josh Langford. He's one of those guys that has given me everything on the court, off the court, in the classroom, like almost nobody I've had. He's handled everything a lot better than I would have handled it."

Izzo described Monday as a day of highs and lows. The Spartans were ranked No. 1 in the preseason AP poll for the first time, then Izzo found out about Langford later in the day.

"That kid has been the most selfless, greatest attitude, committed kid," Izzo said. "Didn't miss a practice last year, didn't miss a trip."

Michigan State made the Final Four last season despite injuries to Langford and other key players. Now the Spartans have to deal with those obstacles again. Izzo said Kyle Ahrens is out at least a week with a sprained ankle.

Izzo didn't sound ready to speculate on Langford's return, or whether he might redshirt.

"Josh is on draft boards. What I want for Josh is what's best for Josh," Izzo said. "He's given me more than four years' worth of sacrificing."