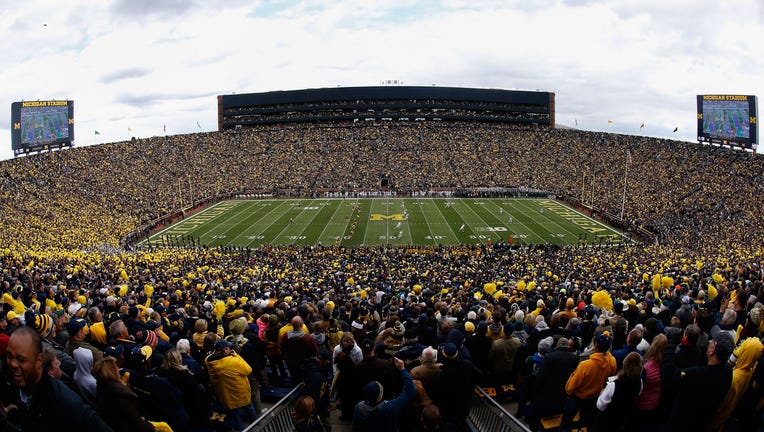 ANN ARBOR, MI - OCTOBER 17: General view as the Michigan Wolverines kick off to the Michigan State Spartans during the first quarter of the college football game at Michigan Stadium on October 17, 2015 in Ann Arbor, Michigan. (Photo by Christian Pete

SOUTHFIELD, Mich. (FOX 2) - On Wednesday, the Big Ten announced it was reversing course and playing football this fall with plans to start playing the weekend of October 24th. While there will be games there will be few fans, if any, in the stadiums to watch the games.

Following the announcement that the Big Ten would play, it was announced that the conference decided no public sale of football tickets. However, each school can decide on their own if families will be permitted in the stadium.

Each team will play an eight-game schedule that is still to be determined.

The University of Michigan and Michigan State University will not be allowed to have fans in the stands for home games, in accordance with State public health limitations.

Testing of players, coaches, and staff will start September 30th and will be done every day.

"Great news today," said UM coach Jim Harbaugh. "Over the past month, I could sense the anticipation from our players and coaches, and I'm thrilled on their behalf that they will have a chance to play a 2020 season. Stay positive. Test negative. Let's play football."

The Big Ten Conference postponed all 2020-21 fall sports on August 11, including all regular-season contests and Big Ten Championships and Tournaments, due to ongoing health and safety concerns related to the COVID-19 pandemic.

The Big Ten announced in July would implement to a conference-only schedule before the cancelation in August.

Michigan State is facing one of the largest outbreaks in the state as 203 confirmed cases have popped up on campus. On Monday, Ingham County served mandatory two-week quarantine notices to 30 houses, including 23 Greek homes, connected to MSU in East Lansing.