SAN ANTONIO - DeMar DeRozan had 29 points, LaMarcus Aldridge had 25 points and 12 rebounds and the San Antonio Spurs hit a season-high 18 3-pointers in beating the Detroit Pistons 136-109 on Saturday night.

San Antonio was 18 for 35 from 3-point range, including a career-high five by Aldridge.

Andre Drummond had 21 points and 18 rebounds for the short-handed Pistons, who played with an 11-man roster due to injuries and illness.

San Antonio set a season-high with 42 points in the third quarter, fueled by a 25-9 run beginning four minutes into the second half. The Spurs opened a 93-71 lead, capped by four straight 3-pointers by Forbes and White and two from Gay. 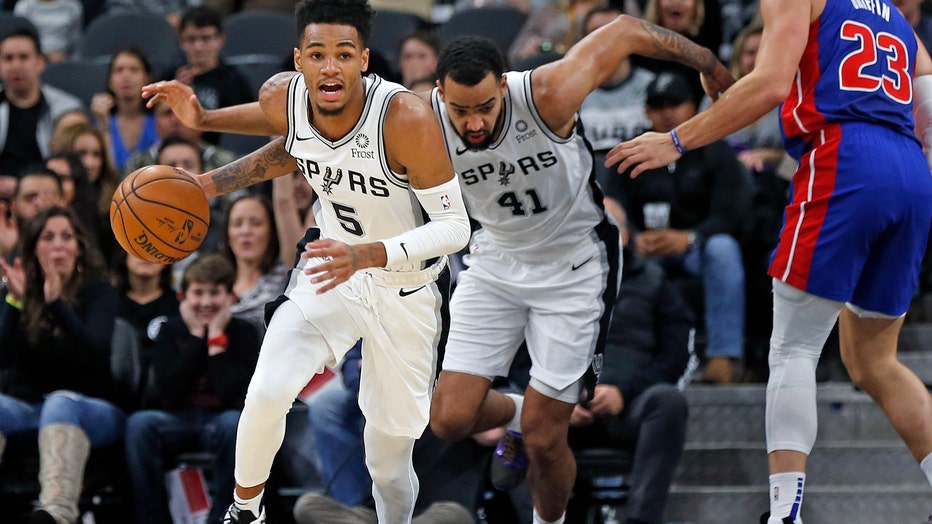 San Antonio raced to a 10-point lead in the first quarter only to lose that advantage in the second quarter while committing nine turnovers.

Drummond had 15 points and 12 rebounds in the first half, helping cut the Spurs’ lead to 59-54 at the half.

Pistons: Detroit’s last victory in San Antonio was Jan. 6, 2015. … Drummond, who was listed as probable with a bruised left calf, played 37 minutes. … The Pistons had five players out with injury or illness. … Shooting guard Luke Kennard missed his third straight game with a sore knee. … Markieff Morris sat out with a sprained left foot after playing nine minutes against Washington on Thursday.

Spurs: DeRozan has 20-plus points in 400 career games. The only players with more 20-point outings since DeRozan was drafted in 2009 are LeBron James, Kevin Durant, James Harden, Russell Westbrook, Stephen Curry, Carmelo Anthony and Aldridge … Aldridge’s previous career high for 3-pointers was three against Memphis on Monday. … San Antonio’s previous high was 40 points in the third quarter against Golden State on Nov. 1.

Zach Randolph announced his retirement Saturday morning after 19 seasons in the NBA, primarily spent in the Western Conference with Portland and Memphis.

Randolph had numerous battles with the Spurs, especially in the postseason. His most memorable was helping Memphis oust San Antonio in the first round of the 2011 playoffs as the Grizzlies became just the fourth No. 8 seed in league history to beat the top seed.

Those battles drew the respect and praise of San Antonio coach Gregg Popovich.

“He was a guy who really had great hands, a great skill to rebound and a great skill to catch and work underneath the bucket, very different from most anybody else,” Popovich said. “He always brought it. He was aggressive and he competed every night.”

Visitor: At Dallas on Tuesday night.

Spurs: At Philadelphia on Wednesday night.