DALLAS - The Dallas Stars got another late overtime goal, this one from rookie defenseman Nils Lundkvist to beat the Detroit Red Wings.

After losing their first five games this season that went past regulation, the Stars have won in the final half-minute of overtime in back-to-back games that were played in less than 48 hours. Lundkvist scored with 30.6 seconds left Saturday for a 3-2 win.

"We lost the opening draw and didn’t touch the puck for the first three minutes again. But I just think it’s a confidence thing," Stars coach Pete DeBoer said. "I don’t have an answer. We haven’t practiced it more. We haven’t spent time on video on it. ... We needed to win one and feel good about it, and that carried over." 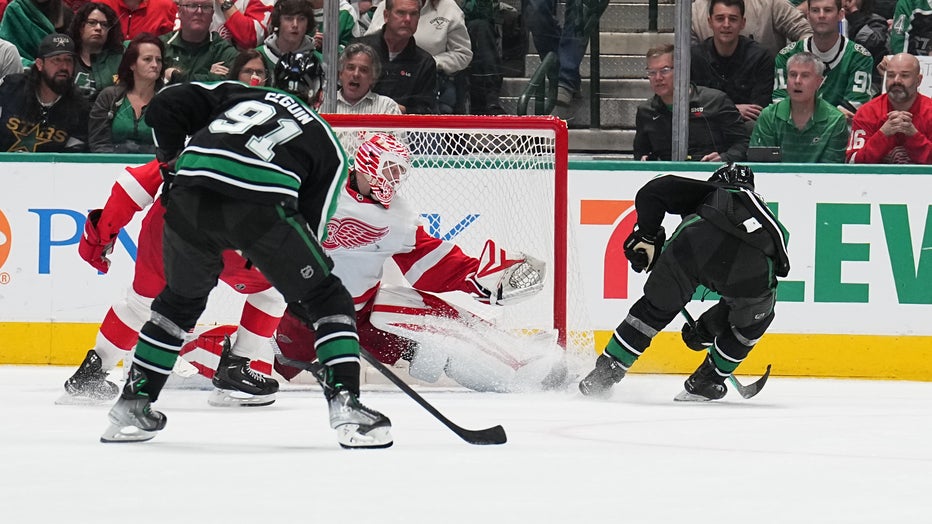 DALLAS, TX - DECEMBER 10: Nils Lundkvist #5 of the Dallas Stars scores an overtime game-winning goal against the Detroit Red Wings at the American Airlines Center on December 10, 2022 in Dallas, Texas. (Photo by Glenn James/NHLI via Getty Images)

Their afternoon game before a five-game trip came after the Stars beat Ottawa 4-3 on Thursday night, when Tyler Seguin scored with 29 seconds left in OT.

David Perron scored for the Red Wings in his 1,000th career NHL game.

The game-winner by Lundkvist, his third goal of the the season, came after Mason Marchment forced a turnover and delivered a spot-on pass to the defenseman skating to the left of goaltender Ville Husso.

"A turnover in 3-3 ... it happened to be 2-on-1, and (Marchment) put it in a great spot," said Lundkvist, the third NHL rookie with an OT goal this season, and only the 10th in Stars franchise history with one.

Both captains had go-ahead goals in the game.

Perron's ninth goal this season, and 278th of his career, tied the game at 2 with a minute left in the second period. He tipped in Ben Chiarot’s 56-foot shot after a faceoff, even while engaged with a defender at the edge of the net.

"That’s a David Perron-type goal. Simple play when he got hard to the net, got a stick on it," Red Wings coach Derek Lalonde said.

"Just a lucky bounce," Perron said. "I’m going to the net, I’m not trying to do anything. And I feel that go off my stick and then in the net somehow."

Larkin scored on a slap shot from the top of the left circle. He was coming off the bench when he took a pass from Austin Czarnik, who started the Detroit rush after picking off the puck at the other end to stop an odd-man chance for the Stars.

Marchment went down in the corner with about five minutes left in the second after taking a stick to the face from Jake Walman, who got a double-minor penalty.

NOTES: Detroit earned points in three of its games during a four-game trip (2-1-1), with the OT loss coming two days after a 5-1 loss to Florida. ... Jason Robertson's 19th assist, on Benn's goal, came after he went without a point the previous two games to end his Dallas-record point streak of 18 games. ... Benn has 27 points (11 goals, 16 assists) while playing all 28 games this season.

Detroit is home against Carolina on Tuesday night.

Dallas is at Pittsburgh on Monday night, the first of five road games in eight days.