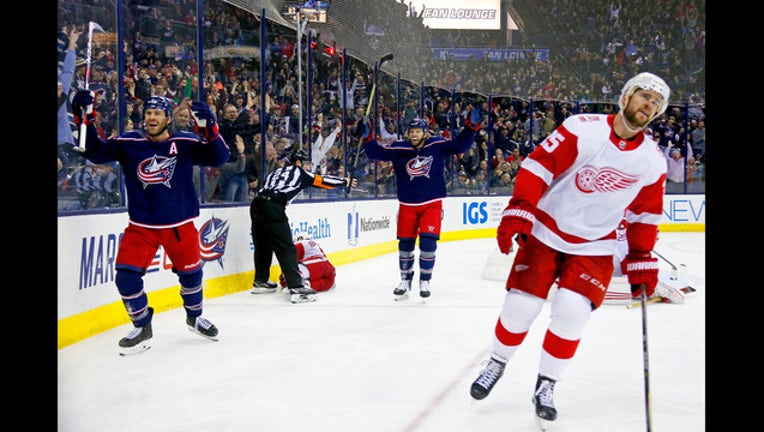 COLUMBUS, Ohio (AP) - The Columbus Blue Jackets are starting to look in front of them to see who they can catch.

Only a week ago, Columbus was simply aiming at hanging onto the final Eastern Conference wild-card playoff spot and hoping some teams behind in the standings would help out.

A 3-2 win over Detroit on Friday night, their fourth straight, put the Blue Jackets in the first wild-card spot with a one-point lead over New Jersey and just two points behind Philadelphia for third place in the Metropolitan Division.

Seth Jones scored twice in the second period and Sergei Bobrovsky returned from an illness to make 22 saves as the Blue Jackets beat the Red Wings to sweep a back-to-back. They have won six of the last eight.

"We always talked about how we just want to make sure we're hitting our stride at the right time," Columbus captain Nick Foligno said. "We've got a little ways to go, but we feel more and more confident about our game as we get closer to the stuff that really matters. That's kind of always been our focus."

Jones got his tallies after winning Thursday night's game against Colorado with a goal 59 seconds into overtime.

"The puck's just going in," shrugged the 23-year-old defenseman, who has 13 goals and 33 assists. "You get stretches like that. Sometimes it goes in and sometimes you go 15 to 20 games without a point. That's just the way hockey is. It's a good time for me to be producing right now in the situation we're in."

"He's had a hell of a year offensively, but the most important part about Jonsesy's game is becoming a leader," Tortorella said. "He doesn't say too much during the game, but just the way he carries himself right now, he knows he's part of that leadership group. All facets of the game, he just keeps improving."

Darren Helm and Andreas Athanasiou scored, and Jared Coreau, in just his second start of the season, had 33 stops for the reeling Red Wings, losers of six straight.

The Blue Jackets started with a short-handed goal near the end of the first period when Alexander Wennberg carried the puck around the back of the net and chipped it out to Calvert, who poked it by Coreau.

The lead didn't last long. Just 21 seconds later, Helm caught Bobrovsky leaning the wrong way and got an easy goal to make it 1-1.

Columbus went back up early in the second period when Jones rifled in a shot from the left circle off a sweet cross-ice pass from Artemi Panarin. Jones struck again at 8:15 when he put back Boone Jenner's rebound.

"As the game went along, they started to grind us a little bit and we had trouble getting out of our end too many times," Detroit coach Jeff Blashill said.

Athanasiou beat Bobrovsky between the pads late in the third period to make it a one-goal game. Helm had a potential tying shot in the final seconds, but Bobrovsky made a nifty save to preserve the win.