DETROIT - Tagovailoa's cool and calm progression led to his third touchdown pass — a go-ahead, 11-yarder to Mike Gesicki late in the third quarter that capped the Miami Dolphins’ rally from a double-digit, second-half deficit for a 31-27 win over the Detroit Lions on Sunday.

"That was the first time we’ve ever hit that route on that concept and you rarely ever see it," Miami coach Mike McDaniel said. "It was No. 4 in the progression."

Tagovailoa usually doesn't need to get to his third or fourth read because he has a pair of options on pass plays that are tough to stop. 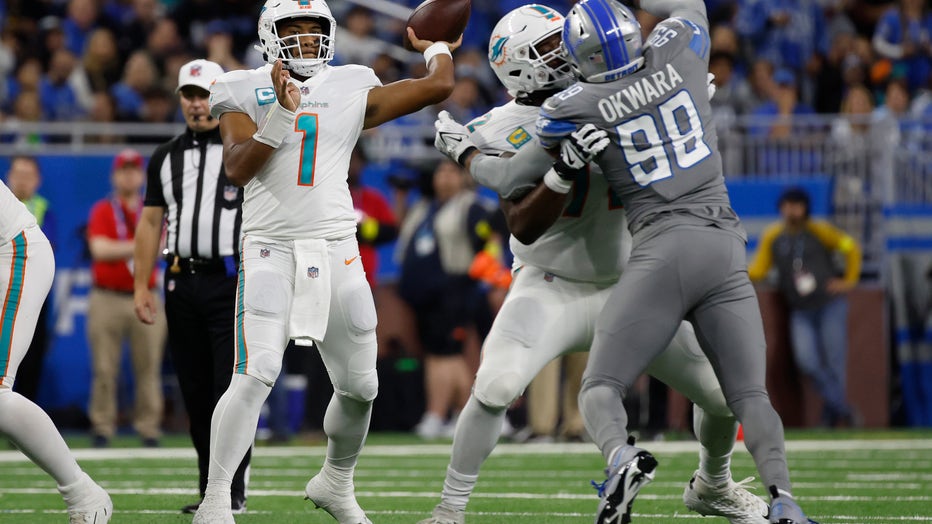 DETROIT, MICHIGAN - OCTOBER 30: Tua Tagovailoa #1 of the Miami Dolphins passes for a touchdown against the Detroit Lions during the second quarter at Ford Field on October 30, 2022 in Detroit, Michigan. (Photo by Leon Halip/Getty Images)

Tyreek Hill had 12 receptions for 188 yards and Jaylen Waddle had eight catches for 106 yards and two touchdowns. Hill and Waddle have 1,688 yards receiving combined, setting a Super Bowl era record for two teammates through the first eight games of a season.

Does the duo feel unstoppable?

Hill had more than 160 yards receiving for the fourth game, one short of the NFL record set by Roy Green with the St. Louis Cardinals in 1984.

"We couldn’t stop their receivers," said second-year coach Dan Campbell, a former Dolphins interim coach. "We didn’t hit them at the line, and that was part of the game plan. We didn’t want to turn it into a track meet, and it was a track meet."

Detroit scored on all five of its posssessons in the first half to lead 27-17 after scoring a total of six points in its previous two games.

Miami opened the second half with a touchdown drive, scoring when fullback Alec Ingold took a snap that fooled the defense and scored on a 1-yard sneak.

The Dolphins took their first lead late in the third on Tagovailoa's pass to Gesicki, who was wide open in the end zone, to score on a fifth straight possession.

Detroit's Jared Goff was 27 of 37 for 321 yards with a touchdown. Goff would have had a second scoring pass at the end of the first half, but Josh Reynolds dropped a pass in the end zone and the Lions settled for a field goal. The four-point difference ended up being critical.

"Turns out that that was significant," said Campbell, adding a lot of penalties proved to be pivotal as well.

Goff also had a chance to convert a fourth-and-1 from the Miami 35 on his last drive, but he threw deep for Reynolds and missed an opportunity.

"I wish I would've thrown a better ball," Goff said. "If I left it outside, maybe we had a chance."

D'Andre Swift was healthy enough to play after a three-game absence and had a 7-yard touchdown reception that gave Detroit a 14-0 lead in the first quarter. Jamaal Williams had two touchdowns for the Lions, who had a 21-7 lead after he scored for a second time early in the second quarter.

"In the second half, we stalled out with penalties and drops," Campbell said.

Each team drew a lot of penalties on both sides of the ball. Miami was flagged four times in the first half, three times for being offside, and Detroit declined other penalties.

The Dolphins finished with seven penalties and the Lions were flagged six times.

Dolphins: LG Liam Eichenberg had a game-ending knee injury in the second half.

Lions: TE Brock Wright left the game with a concussion and CB A.J. Parker (hip) was injured during the game.