TORONTO - John Tavares had a goal and two assists and Petr Mrazek made 26 saves for his first victory with Toronto in the Maple Leafs' 5-4 victory over the Detroit Red Wings on Saturday night.

Jake Muzzin and Alexander Kerfoot each had a goal and an assist and Mitch Marner and Michael Bunting also scored to help Toronto improve to 4-4-1.

Joe Veleno and Filip Zadina had a goal and an assist apiece and Vladislav Namestnikov and Filip Hronek added goals for Detroit. Thomas Greiss stopped 33 shots.

The Red Wings dropped to 4-3-2. They played without scoring leader Tyler Bertuzzi because he has declined to be vaccinated against COVID-19 and is unable to travel to Canada without a 14-day quarantine. 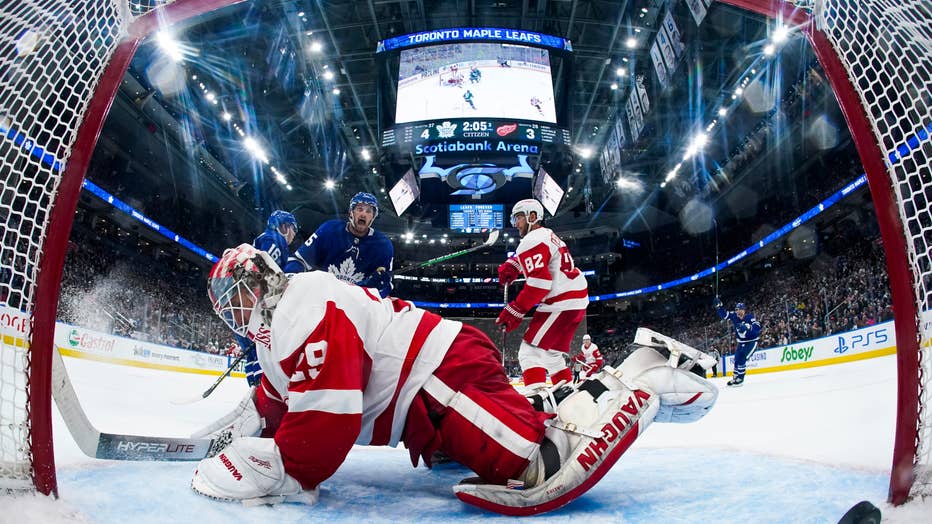 TORONTO, ON - OCTOBER 30: Mitch Marner #16 of the Toronto Maple Leafs scores against Thomas Greiss #29 of the Detroit Red Wings during third period at the Scotiabank Arena on October 30, 2021 in Toronto, Ontario, Canada. (Photo by Mark Blinch/NHLI vi

Bunting snapped a 1-1 tie — and Toronto’s 0-for-17 stretch with the man advantage over the last six games — when he redirected Jason Spezza’s slap pass with 17.1 seconds left in second period on the Maple Leafs’ first power play.

After the Maple Leafs killed off a penalty, Tavares scored off Kerfoot's pass on a 2-on-1 to make it 4-2 at 7:47. But the Red Wings responded at 10:11 on Namestnikov's redirection.

Marner made it a two-goal lead with 2:05 left with his first goal in 17 games darting to last season. Hronek made it 5-4 with Greiss off for an extra attacker.

Detroit: At Montreal on Tuesday night.